Gonna exercise my blog right and pull off something rather sudden here. As I usually do, I go through my many entries to see if there have been any videos pulled down due to the usual copyright claims and sure enough there were a few. During my usual housekeeping, though, I also found out that my lone entry for the fascinating duo, dip in the pool, was rendered almost without any songs due to the demise of music163, and there were a few folks trying to look in.

Felt somewhat badly about that but then I came across this YouTube video which according to the uploader may have been put up around 1993 on some TV show. It turned out to be Miyako Koda's（甲田益也子）soft and appealing cover of Yellow Magic Orchestra's classic "Tong Poo". On the article for the song, there was YMO's original technopop version along with Akiko Yano's（矢野顕子）fun and quirky cover.

However, with dip in the pool's take, Koda just plays her voice like a piano during a midnight jazz session with a quiet bossa arrangement of the melody. If I can now use a foodie analogy, her vocals just sound so chocolate and caramel; they simply flow steadily.

I don't know whether this was a one-off performance of "Tong Poo" or whether Koda's version has actually been recorded somewhere but I will appreciate it if someone can inform me. Hopefully, putting this article up will make up for losing a lot of songs from "KM 93.11" although I managed to find one video to put in there. 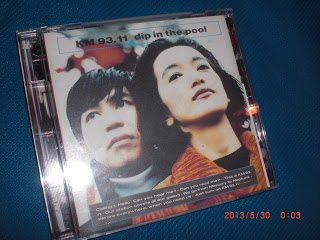