Hello, my song. I can't quite believe that I had yet to feature this classic by Yuming（ユーミン）. "Hello, my friend" was Yumi Matsutoya's（松任谷由実）25th single from July 1994. The song could have done fine just on its own but it was also the theme song for a Fuji-TV prized Gekku（月９...Monday at 9）drama, "Kimi to Ita Natsu"（君といた夏...The Summer You Were Here）, which was also one of the dramas that my club featured at its weekly JTV programme at the International Student Centre, University of Toronto way back when.

Well, when you combined a Yuming song with a Gekku drama, it usually meant a symbiotic success. As one of the last songs of hers that I really enjoyed, "Hello, my friend" manages to be a sad and happy song at the same time. Against that sunny and lightly bouncy melody, the protagonist seems to have re-encountered an old flame, and although the romantic relationship is truly over, he/she just would be grateful just to continue on a friendship. It's one of those tunes that can cut through generational lines like a hot knife through butter.

Just like the previous single "Manatsu no Yo no Yume"（真夏の夜の夢）, "Hello, my friend" was another No. 1 theme song for a drama which broke the million-seller barrier for the 2nd time for the veteran singer-songwriter. It shared another record in that it also broke the Top 10 for its year, coming at No. 6. The song was also a track on Yuming's hit 26th album, "The Dancing Sun" from November 1994.

Not surprisingly for a Yuming tune, "Hello, my friend" has been covered by a number of other singers since its release over 20 years ago. But here is one by Noriyuki Makihara（槇原敏之）from his 2014 cover album "Listen to the Music 3". Makihara also did a cover of another huge hit (and the next single) by Yuming, "Haru yo, Koi"（春よ、来い）which incidentally is also a track on "The Dancing Sun". 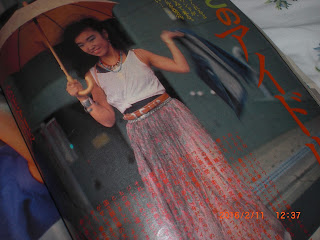