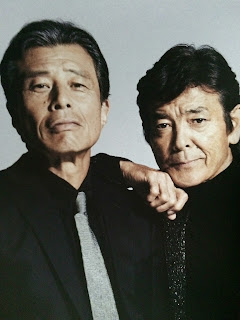 Oh my goodness, that picture. Ack! Kyohei Shibata (柴田恭兵) is cool and still looks decent and all but Hiroshi Tachi (舘ひろし) is so... So... Hot! I feel like Keisuke Kuwata (桑田佳祐) at the beach after he took a look into his binoculars in the Southern All Stars "DIRTY OLD MAN ~ Saraba Natsu yo" (DIRTY OLD MAN ～さらば夏よ～) MV... ...

*Ahem* Sorry about that. Got a bit... distracted there.

ANYWAY, a couple of weeks back I headed over to Kinokuniya for a look-see at the Japanese magazine section in hopes that I'd find myself another enka-yo magazine. Sadly I couldn't find anything of that sort. However, to make up for that I stumbled upon the wonderful sight of Tachi and Shibata on the cover of "Men's Ex", a Men's fashion magazine, and an issue of "PICT-UP", on movie entertainment. My mind kinda froze and needed a moment to process what I just saw. Needless to say, I got both. While "PICT-UP" had many snapshots of the two suave-looking fellows in mod suits and sunglasses, the "Men's Ex" one only had a couple of photos in the first few pages, after that it was all about nice shoes and bags of foreign brands and exorbitant prices. At least the cover photo was huge.


As to why Tachi and Shibata were featured on the magazine covers, it's because their newest film, "Saraba Abunai Deka" (さらば あぶない刑事... Farewell Abunai Deka), was released on the 31st of January of this year. It's supposed to be the 6th and last installment of the buddy-cop series that's similar to "Miami Vice", "Abunai Deka" (あぶない刑事), that began in 1986 as a TV drama, and it also came out a little more than ten years after the previous "Abu-Deka" movie, so it seems like it got quite a lot of attention. Watching the promotional video for "Saraba", I have to say that it's as cheesy as it was 30 years ago in the late 80's, but I'd watch it just because and there looks to be a number of funny moments as well, so why not?

Kicking off the promotional video was the deep voice of Tachi crooning a song that has pretty much become the theme to the "Abunai Deka" series, "Tsumetai Taiyo". Being Tachi's own hit single that he wrote from 1986, it was first used as the theme to the first season of "Abu-Deka" that very same year, then in the first movie in 1987. I must say that this tune does fit the image of the shades-wearing Toshiki Takayama (鷹山敏樹) a.k.a. Taka, played by Tachi, and Yuji Oshita (大下勇次) a.k.a. Yuji, played by Shibata - the music has this cool vibe to it and the saxophone gives it a refined edge and an air of mystery.


The ending for the first "Abunai Deka" (the TV series, I think).

A new version of "Tsumetai Taiyo" or the "NEW BLOOD VERSION" was released 10 years later in 1996 and was the theme for the fourth movie, "Abunai Deka Returns" (あぶない刑事リターンズ). The air of mystery in this rendition was traded for funk as the sax and trumpets blare away. You can check it out at niconico here if you have an account. I like both versions, but I think I find myself favouring the "NEW BLOOD VERSION" - it's arrangement reminds me of the good times I had in San Francisco for some reason. Finally, "Tsumetai Taiyo Final Version" was used as the ending theme for "Saraba Abunai Deka". It was released on 9th December 2015 in Tachi's 40th anniversary album "ANTHOLOGY 〜40th ANNIVERSARY BEST ALBUM〜" - I haven't yet heard it, but knowing me I'd buy that album in the near future to listen to it... Okay, fine, to be honest the main reason I'd buy the album is that Tachi looks so cool on the cover. 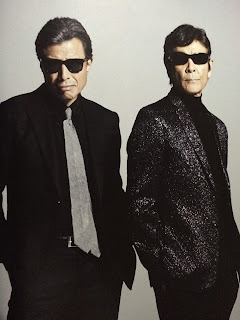