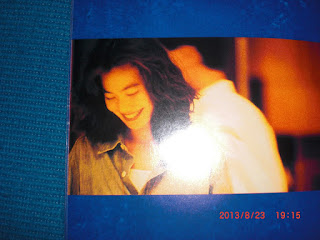 Much like I did for Taeko Ohnuki's（大貫妙子）"Romantique" a couple of months ago, I've decided to do a follow-up on an article I did on another favourite album. This time, it's "Retour" by Miki Imai（今井美樹）from 1990. As I mentioned in the original article back in 2012, Imai's 5th album to me is the quintessential album by the lithe singer with the wide-as-the-Mississippi smile. All of the songs are wonderful concoctions of uptempo fun tunes and mellow ballads, and a few of the tracks that weren't included in the "Retour" article got their own entries: "Ame ni Kiss no Hanataba wo"（雨にキッスの花束を）, "Nakitakatta"（泣きたかった）and "Motto Motto Motto"（もっと、もっと、もっと）.


"Kakehiki 27" (カ・ケ・ヒ・キ 27...Strategy 27) is another one of the playful tracks written by Imai and composed by Jun Sato（佐藤準）. It's nice and brassy and seemingly fit as the theme song for a trendy drama on Japanese TV that could have easily starred the singer herself when she was acting fairly regularly. The lyrics by Imai themselves paint a scene from such a comedy-drama as two friends just chat away at a restaurant or cafe while one of them is wondering how she can get her significant other to promote themselves up to a level above merely buddies. Considering the number of strategies in the title, the guy might be as dense as a brick.

"Kyonen wa Hachi-gatsu datta" (去年は、8月だった...Last Year, It Was August) by Keiko Aso（麻生圭子）and MAYUMI is a soulful number with Imai singing about a relationship a year in with the protagonist making an assessment about how things have gone and how might they go. I wonder if this might have been a sequel to "Kakehiki 27".


"Hansode"（半袖...Short Sleeves）is hopefully not a further sequel to the two songs above since the sad ballad is about life after the end of a relationship...perhaps due to the death of that significant other. Yuuho Iwasato and Chika Ueda（岩里祐穂・上田知華）were responsible for this 3-Kleenex song.


The final track, "Atarashii Machi de"（新しい街で...In A New Town）is one of the truly memorable songs on "Retour" and makes for a fine finale to the album as well as a fine finale to any Miki Imai concert. There's very much a sunset feeling to KAN's melody and Iwasato's lyrics talk about a new start. The piano that starts things off and that saxophone during the bridge are the highlights for me.

The remaining two songs are "Fuyu no Market"（冬のマーケット...Winter Market）with Akemi Kakihara（柿原朱美）providing the melody to Iwasato's lyrics and "Kagayaku Hoshi ni Natte"（輝く星になって...Shining Star）by Imai and Mioko Yamaguchi（山口美央子）couldn't be found except through excerpts on the Amazon site selling the CD but they are also just fine to listen to, especially the former. If either or both of them pop up on YouTube someday, I would be happy to cover them as well.

Knowing that I would be writing about the album tonight, I decided to pop the CD into the player again earlier this afternoon. No change...still just as wonderful as when I had bought it back over a quarter-century ago.
Posted by J-Canuck at 10:29 PM