DEEN is not the type of group/band I’d check, even in a a million years. However, my Nihongo teacher kindly gifted me with some of her old singles, and DEEN’s “Tsubasa wo Hirogete” (翼を広げて) happened to be one of them.

While the title track didn’t do anything to me, I liked the coupling song, “Yume no Tsuzuki......Love in my dream” a lot. That’s probably because of its somewhat funky vibe, while still mantaining a mellow romantic feeling. Actually, the song is quite sexy in its own way, especially in how the vocalist Shuuichi Ikemori (池森秀一) pronounces “girl”. In the end, the song kind of reminds me of Masayuki Suzuki (鈴木雅之), even though I'm not too sure if he would be able to own the “girl” line just like Shuuichi did.

Maybe I could benefit from grabbing a DEEN’s compilation someday, just to see what I’m keeping away because of pure prejudice. Also, thanks a lot for the gift, 先生.

The “Tsubasa wo Hirogete” single was released in July 1993. It reached #5 on the Oricon charts, selling 570,900 copies. Lyrics and music were composed by Shuuichi Ikemori himself, while arrangement was done by Takeshi Hayama (葉山たけし). 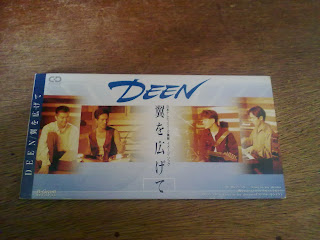