I don't know about those of you who are fans of Kiyoshi Hikawa (氷川きよし), but in the recent months I've noticed that this fellow has become more mature. Probably he's more aware of his age now and is trying to be more appropriate? Or perhaps it's just to match the tone for his new single, "Miren Gokoro" - it had Hikawa keeping a straight face and restricting his otherwise bombastic movements for about 90% of his performance on "Kayo Concert" about a month ago. Be as it may, I'm liking his slightly more serious mien... and hairdo. If he keeps this up, could it be possible for him to be promoted to one of my favourites? Hmm...


Alright, "Miren Gokoro" is definitely not as severe as I may have just implied and it definitely doesn't have the style of a heavily melancholic, cry-in-your-sake sort of enka. Hideo Mizumori (水森英夫) had put together a rather retro score that fits a joyous drinking occasion and Hikawa's funny manner of dragging some of the words does make it seem like it is so. The lyrics on the other hand, penned by Daisuke Shiga (志賀大介), tell a different story, one of heartbreak, regret and perhaps some wishful thinking on the part of our heroine who hopes to see the one who got away once more. She also seems to be berating herself, probably for giving herself some false hope.

"Miren Gokoro" came out on 15th February 2016 and as usual it managed to hit the top 3 on the normal charts, peaking at 2nd place. Reading it's description on the Oricon site, "Miren Gokoro" is apparently Hikawa's first go at singing in the perspective of a woman.


Now we shall move on to the B-side to "Miren Gokoro" for the A-type version. I don't believe I've seen/heard of Hikawa tackling a Mood Kayo of his own before - it's either that or I'm simply not well versed in his discography - until "Setouchi Blues" came along.

The moment I heard the mournful sax and the "Wa wa wa" at the beginning, my mind immediately went to another Kiyoshi and his five-now-reduced-to-four cronies as it really sounded like something they would have sung back in the 70's or maybe even now with it's modern kick. Mizumori was also responsible for the music to "Setouchi Blues", and writing it was Daizo (?) Saito (さいとう大三) this time round. I enjoy both the A and B-sides, but I think I prefer "Setouchi Blues" by a slim margin. I'm kinda hoping that Hikawa would sing it on TV some time, though I figure it'd be unlikely as B-sides tend to not get as much love. 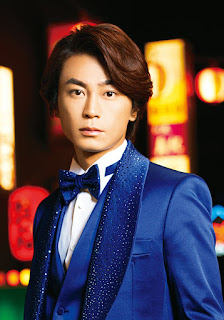