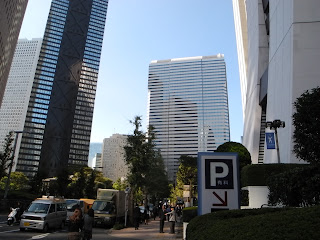 One of the enduring images of Japan that kept up my determination to return to that country when I was a high school student was on a poster produced by Japan Travel Bureau which showed a glorious photo of the skyscrapers in West Shinjuku during sunset. The light and shadows bouncing off the tall buildings just had me going "Yes. I have to get back there someday." And I did. I often walked among the towering office towers and hotels in Shinjuku on my way back to my school or heading to an assignment. Nothing said Modern Japan than a stroll in that area. And if you want to do the same there, just head for Tochomae Station on the Oedo Line.


Speaking about analogies, nothing says City Pop more than a song with a title containing the word matenro in it. Nice tall buildings overlooking the drama being played out on the streets down below makes for a good scene behind an urban contemporary song in Japan.

One such example is a song that I discovered on YouTube by the rock band TokyoJAP （東京JAP）which had its run between 1982 and 1986. Consisting of members from a rock n' roll musical troupe known as Mr. Slim Company, the band debuted with the single "Give Me Chocolate"（ギブミー・チョコレート）and the album "Hatsu"（発...Departure）in 1982 and released 6 singles and 4 albums in total before their breakup.

TokyoJAP's 5th single "Matenro Blues" (Skyscraper Blues) from October 1984 was the one hit that the band had. Written by Masao Urino（売野雅勇）and composed by Kyohei Tsutsumi（筒美京平）, it is one of those cool night-in-the-metropolis tunes that has the band sounding midway between Omega Tribe and TOKIO. With the bongos and harmonica in there, I can just imagine seeing some dude walking on the street between the skyscrapers sucking back on a Marlboro.


Peaking at No. 18 on the charts, "Matenro Blues" managed to sell a little over 100,000 copies. It was also the ending theme song for a TBS drama starring a young Kyoko Koizumi（小泉今日子）titled "Shojo ni Nani ga Okotta ka"（少女に何が起こったか...What Happened to the Girl?）which had its 12 episodes featured between January and March 1985.