I didn't realize that it's been well over a year since I put up my last Off-Course（オフコース）ballad. To be honest, I had seen this atmospheric uploader-made video on YouTube for "Endless Nights" some years ago and just thought it was perfect for the deep atmosphere generated by the ballad. I mean, it's almost like having really melodic alpha waves reaching into your brain to get you into that introspective mood. Never got around to writing about it until today, though.

"Endless Nights" was Off-Course's 31st single from November 1985 and it was one of the tracks on the band's self-cover album "Back Streets of Tokyo" which had been released earlier in August. The song and the album were notable in that they were all English cover versions of past Off-Course material. In the case of "Endless Nights", the original source song was "Tasogare"（たそがれ...Twilight） , the band's 29th single from May 1985.


I couldn't get a complete version of "Tasogare" on YouTube but there is an excerpt on the above video right from the start. In either case, Kazumasa Oda（小田和正）who wrote and composed the song just dares you to look for that snowy night to walk downtown at night thinking about life. Good timing on that November release for "Endless Nights". Considering that I live in Toronto, I think there will still be a few of those to come in the next several weeks before we finally enter spring for good.

Perhaps neither "Endless Nights" nor "Tasogare" would be considered classic City Pop ballads but I can't foresee any other place than a city like Tokyo as a setting for this song. Besides, "Endless Nights" does make a shoutout to the Big Sushi in its lyrics. And although it is an Off-Course song, I can hear where Oda started getting his own sound as a solo singer before he started coming up big with his own hits from the late 1980s.

"Tasogare" managed to peak at No. 7 on Oricon before finishing 1985 as the 100th-ranked single of the year. It didn't get onto an original album by Off-Course but was placed on the band's 5th BEST album "IT'S ALL RIGHT SELECTION III 1984-1987" from July 1987. As I said before, its English-language cover got onto "Back Streets of Tokyo" which went all the way to No. 1 and finished the year as the 35th-ranked album. "Endless Nights" got as high as No. 26.

Songwriter Randy Goodrum also helped out on the lyrics for "Endless Nights", and I found out that he was also responsible for a lot of the songs from my youth. One such hit was DeBarge's "Who's Holding Donna Now?" 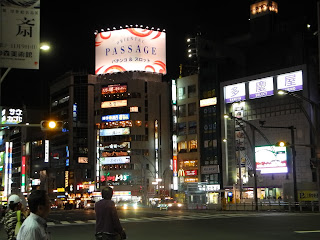