I've got another track from Taeko Ohnuki's（大貫妙子）"Romantique" of July 1980. It's a sad and wistful number called "Atarashii Shatsu" (A New Shirt) written and composed by her which stands out in that it's not nearly as techno-quirky (although the guys from YMO are backing her up here) or as European as some of the other tracks. In fact, considering that Ohnuki started going into her distinctive techno/European sound from this album, this particular ballad sounds like a reminder of her more conventional New Music days from the 1970s.


Aside from a slightly peppy march-like synth at the intro, "Atarashii Shatsu" has a down-to-earth bluesy feel which becomes more romantic and hopeful getting into the refrain. According to Ohnuki herself in an interview for the Japanese music journal "Music Steady" in 1983, she wanted to convey that moment of revelation and grief on realizing that a loved one has finally left due to breakup or untimely death. It doesn't have to be at the time of separation; it could be several days or even months later when that moment finally hits like a freight train as something like a new shirt is being unwrapped and placed in a drawer or closet. The moment might hurt like hell but there is catharsis afterwards in the form of a sunbeam slicing through the clouds

The video immediately above is Ohnuki performing "Atarashii Shatsu" at a tribute concert for Kenji Omura（大村憲司）who had passed away in 1998 at the young age of 49. Omura performed the electric guitar solo during the original recording, and there is a rightness about her performing this particular song for him. 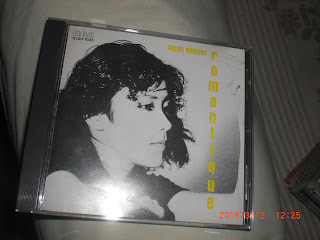