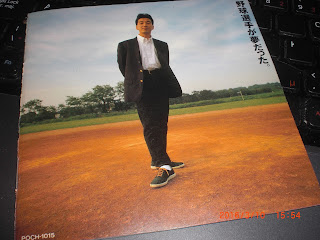 I never quite expected that I would actually write an article on a KAN album. Up until a couple of days ago, it had been merely my intention to look for a KAN song since it had been a long while that one of his creations went up on the blog. So I pulled out the first of the two albums that I bought of the singer-songwriter, "Yakyuu Senshu ga Yume datta" (I Wanted To Be A Baseball Player) from July 1990.


Of course, for those who knew KAN-chan at the time, the big highlight from the album was his 8th single, "Ai wa Katsu"（愛は勝つ）which became the feel-good hit of 1991 and a karaoke staple at the time. It was certainly one of those songs that was just everywhere back then whether you liked it or not.

Well, after getting re-acquainted with "Yakyuu Senshu ga Yume datta" again, I realized that there were indeed some other fine tracks, and a few of them actually got put onto my own compilation audio tapes of Japanese pop music. So I have decided to cover the album in general.

My fellow collaborator, nikala, was also someone who enjoyed the works of Kan Kimura（木村和）and she covered a song, "BRACKET", from his earlier days in the late 1980s which was where I realized that the singer had taken a more funkier approach to his music and fashion. With "Yakyuu Senshuu", however, KAN went with some pretty happy and peppy pop. And knowing that he was a big fan of another Piano Man, Billy Joel, I realized that this album may have been a tribute of sorts.

Case in point is Track 2, "Koi suru Futari no 834km"（恋する二人の834km...834km of Two People In Love）. It is a comical speedy tune by KAN about a young couple who just can't seem to live with or without each other. There is love but there are also plenty of rockets. It was one of the songs that I taped onto a homemade compilation CrO2 way back when. And listening to it again, I realized that there was a certain glancing resemblance to Joel's "Movin' Out" song from the late 70s...at least to me.


I think another Billy Joel influence on KAN is some of those rolling piano flourishes that he has used....for example on Track 3, "Keyaki Dori ga Irozuku koro ni"（けやき通りがいろづく頃...When Zelkova Avenue Changed Colour）, a beautiful bittersweet ballad with strings about moving on from an old romance. KAN is not the strongest singer but it's because of how he sounds that songs like these take on a further warmer feeling. That was probably emphasized during his TV appearances and concerts due to his fuller hair, good-boy suits and the fact that he has those adorable hang-dog looks. He and Noriyuki Makihara（槇原敬之）could have been congenial roommates in college.


Perhaps Japanese folks around my age or slightly younger would be more than happy to go to this track "Happy Birthday" as a go-to tune to celebrate a buddy's special day. Strangely enough, when I was at various restaurants in Tokyo, there would be another group of people celebrating someone's birthday to the sounds of Stevie Wonder's "Happy Birthday". Admittedly Stevie sounds cooler but KAN may have the nostalgic edge for some.


My last track is "Kenzen Anzen Kouseinen"（健全 安全 好青年...Health, Safety, Nice Young Man）for which the above video is a karaoke version. I still wanted to cover it since it is the one track that follows a different singer and one of his big hits, namely "Sussudio" by Phil Collins according to the article for the song on J-Wiki. It was actually the preceding single to big hit "Ai wa Katsu" that was released in May 1990. Aside from KAN's tribute to the Collins hit with the mysterious title, I also wanted to talk about this since KAN goes into a small crisis involving a girl introducing her boyfriend to her parents. The young beau is chafing at why he has to become the ideal droid instead of being the imperfect if decent enough guy for the family. Even the song's somewhat techno edge in the refrain rather mocks the robotic image of Mr. Right.

I couldn't find anything online for the song but the track "1989 (A Ballade of Bobby & Olivia)" is definitely a riff on Billy Joel's "Scenes From An Italian Restaurant", which like the aforementioned "Movin' Out" is a track from his legendary "The Stranger" from 1977. 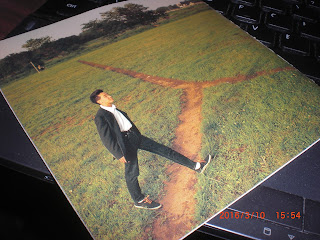 "Yakyuu Senshu" was KAN's 5th album. It went as high as No. 2 on Oricon and became the 17th-ranked album for 1991. It was quite the feather in the singer's cap but there was apparently some friction between him and the arranger when it came to a couple of the tracks which led to the arranger getting replaced soon afterwards. I guess the poor guy who got let go faced the wrath of KAN (I'm sorry, Trekkies...just had to get that one out).

But seriously folks, I'm pretty interested in getting some of KAN's earlier albums now such as his 1987 "No-No-Yesman".
Posted by J-Canuck at 5:26 PM