About a half-hour ago, the top story on the NHK morning news was the official launch of the Hokkaido Shinkansen. I'd heard about the build-up to the big launch over the past number of months but wasn't aware that the day was today. Not surprisingly, a lot of the tore-ota (train otaku) were there to see off the newest Bullet Train on its inaugural run. My anime buddy actually and a couple of other friends took off this morning to head for Japan for a few weeks of holiday; I'm sure my friend would have been more than happy to have had the opportunity to get some shots himself but the schedule just wasn't meant to be.


So I actually thought for a few minutes about what would be a commemorative song for the event. It didn't take me too long, actually. The words "TRAIN, TRAIN" suddenly started to echo through my brain with the slightly growly voice belonging to Hiroto Komoto（甲本ヒロト）of The Blue Hearts.

Hey, it's a Friday night as well so it probably means the karaoke boxes are (or were, to be exact) going through the busiest night of the week. As I remember, "TRAIN-TRAIN" was as much a karaoke favourite and stress-busting song as The Blue Hearts' big hit of "Linda, Linda" which was a personal favourite of some of my former colleagues. And just like that good time song, "TRAIN-TRAIN" starts off slowly before going off on full rock speed which would match quite nicely with the acceleration of a Bullet Train.


Written and composed by guitarist Masatoshi Mashima（真島昌利）, "TRAIN-TRAIN" was the 7th single released by The Blue Hearts (the J-Wiki pages for this particular song and the band have different numbers for the song depending on the band's professional status...I just counted down the chart) in November 1988. I think along with the raucous fun that Mashima produced through the arrangement, that refrain of "Train, Train" which sounds something like a bunch of little kids would yell out was the key element to its success.


"TRAIN-TRAIN" was the first Top 10 hit for The Blue Hearts as it rose to No. 5 on Oricon, and it became the 29th-ranked song for 1989. Not only was it a karaoke hit but other entities were more than happy to borrow it for their own purposes. It became the theme song for a TBS drama titled "High School Rakugaki" (はいすくーる落書...High School Grafitti) starring aidoru Yuki Saito（斉藤由貴）, and a number of variety shows liked to co-opt it for anything related to trains. Plus it seems like sports events also used the song for particular athletes. And why not? What better song to show off happy unleashed energy to infiltrate the spectators and lucky players? Not quite sure if Japan Railways ever got onto the bandwagon, though. 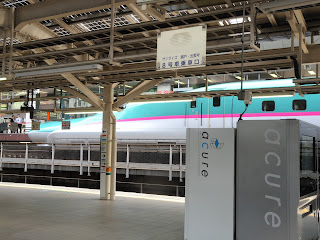