Well, March roared in like a lion today. Just as we all thought that winter was on its way out mewling like a kitten on Sunday with 14-degree temps (that is an absolute heat wave in my area of Canada at the end of February), the cold season is threatening to take its measure of revenge with a storm promising 15 cm of snow by tomorrow. Dogpiling onto that misery is that our transit system shut down this morning due to a power outage because of an overnight fire. When it snows, it pours.


Fortunately for me,  I work from home. I can observe the carnage on television and sympathize for my TTC-using friends.

In any case, I start my contribution to "Kayo Kyoku Plus" for March 2016 with an interesting song by Kanako Wada（和田加奈子）which was the final track on her 4th album "KANA" from 1987, "C. Claudel no Tsumi" (The Indiscretion of Camille Claudel).

Written by Wada and composed by Tsukasa, it's a bit different from the usual sunny/romantic Wada music that often graced a "Kimagure Orange Road"（きまぐれオレンジ☆ロード）soundtrack. For one thing, it's a fairly introspective (though not dour) piece that smacks more of Taeko Ohnuki（大貫妙子）and perhaps even Eric Carmen as one YouTube commenter stated. And as the title would indicate, there is a deeper take on the lyrics as Wada wonders aloud about the trials and tribulations that 20th-century French sculptor Camille Claudel had endured as the confidante and paramour of Auguste Rodin before she succumbed to mental illness for the last few decades of her life.

Although my initial impression of Wada when she debuted with the album "Tenderness" in 1986 was that she didn't have the most stable of vocals, the singer-songwriter definitely got quite a bit better pretty quickly especially after I heard this particular ballad for the first time. Perhaps she had settled on the right genre but I really enjoyed how resonant she sounded particularly on some of those high notes. And there was a certain brief switch in key during the refrain that managed to strike a chord. It's not every day that I come across an enjoyable pop song about a figure in art history.

There are a couple of tracks from "KANA" that I've already covered: "Sunday Brunch" and "Tanjoubi wa Minus Ichi "（誕生日はマイナス1）. 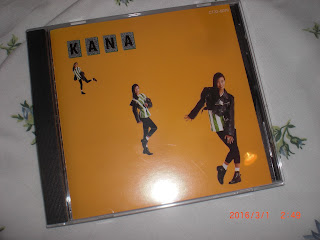