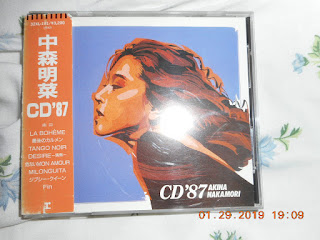 I had actually thought about writing this article tomorrow since tomorrow is the 7th anniversary of "Kayo Kyoku Plus" and Akina Nakamori（中森明菜）has been one of my touchstone singers pertaining to our blog. But seeing that I also have another plan for the anniversary on January 30th, I just went "What the heck?"

So I've decided to go with something classy from the Nakamori oeuvre tonight. This is "Yakusoku" (The Promise) which is originally from her 1986 album "Crimson". Now for folks who have already taken a gander at my article for the album, you already know how I had initially felt about "Crimson" and that I've mellowed a fair bit since my rather negative feelings had first come out back in my university days. You also know about the fate of my audiotape as it was brutally mangled by Jaws the wayward tape recorder.

In any case, my redemption concerning "Crimson" continues with "Yakusoku". Written and composed by veteran songbird Mariya Takeuchi（竹内まりや）, it is a bittersweet tale with a contemporary nightclub jazzy feel that brings to mind downtown fine dining and uptown living as Akina-chan portrays a lady who has moved onto a new guy but still holds a torch for the previous beau. However, the titular promise from the former flame is that once the relationship is over, there is no do-over. She's a bit sad about it all but despite her feelings of longing, her mind seems to have accepted things and she's moving on. However, from the music's cue, there is nothing maudlin here. If the former fellow ever showed up by coincidence at the restaurant she was at, then they would exchange friendly smiles and move away and forward.

Nakamori's vocals had started to change even further when she worked on her late 1980s albums when compared to her singles which never showed up on the albums. There was her high-toned delivery as an aidoru in the early 80s which metamorphosed into the deeper tones of the superstar for her mid-80s work. But once she went into her more "experimental" album material, her voice seemed to take on an even smokier quality. And I think this more sultrier-sounding Akina is a good match for a song like "Yakusoku".


As I said before, Takeuchi was the one behind the creation of "Yakusoku". Her version of the song first appeared as the coupling tune in her 24th single from May 1994, "Jun'ai Rhapsody"（純愛ラプソディ）, and then it was placed onto the bonus disc "Vintage Denim" which was only included in the first edition of Mariya's 10th studio album "Denim" from May 2007.

According to the J-Wiki write-up of "Vintage Denim", Takeuchi's husband, Tatsuro Yamashita（山下達郎）, was furious about how "Yakusoku" had been interpreted in Nakamori's performance, and as such, he suggested that Mariya do a self-cover which led to her recording "Yakusoku" herself. For the record, though, she has praised Akina's version as the more mature take. I've always kinda wondered how an argument between those two would have gone.

My take on it? Takeuchi's cover of "Yakusoku" is very Mariya. It's breezy and has a bit of that 50s feeling that used to signify her earliest songs. Instead of that downtown French restaurant, I get images of a Sunday afternoon walk in the park. Not to disagree with one of my favourite singers but I think her "Yakusoku" is definitely not a teen-themed tune; it's just as mature but it's in a different venue.
Posted by J-Canuck at 9:20 PM