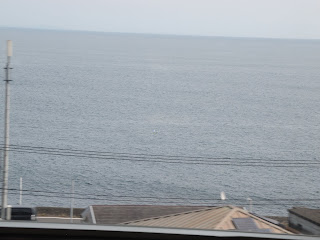 For readers of "Kayo Kyoku Plus" in much of North America currently, you may be ardently swooning over summer pictures like the above (although this was actually taken in October). Yes, that Polar Vortex of petrifying cold must be having you feeling lower than a centipede's pot belly. Over the last few days, I've been keeping my errands outside to a minimum. I get out to do one task and then get back inside. The nice thing is that temperatures ought to be rising up to a torrid -1 degree Celsius at least by this weekend, and up to a heavenly 7 degrees by next Monday.


Well, there's always the Fireplace Channel on cable for some of that lovely placebo effect or you can give Saori Minami（南沙織）a try through her 2nd single "Shiokaze no Melody" (Sea Breeze Melody). Released in October 1971 (perhaps the song was trying to keep those happy summery feelings alive), right from Note One, it's all warm winds and sunny sea coast as Minami recounts a romance by the ocean.

"Shiokaze no Melody" was written by Mieko Arima（有馬三恵子）and composed by Kyohei Tsutsumi（筒美京平）and had Minami performing it on a number of shows including music programs and even some dramas through cameo appearances, according to J-Wiki. Also, I gotta say that maybe the song provided one of the first music videos for a Japanese singer. The single peaked at No. 7 and ended up as the 91st-ranked song for 1971 and held on for another year to become the 99th-ranked single.

It was also the title track for Minami's first album of cover songs released in December 1971 as it broke the Top 10 at No. 10 on the Oricon weeklies. To end this, I've gotta make this rather bizarre statement and say that Minami on that cover for the album looks a fair bit like actress Chloe Bennet from "Agents of SHIELD".
Posted by J-Canuck at 7:46 PM