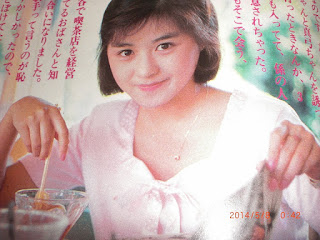 As a kid, one of my life's simple pleasures was having the car getting a car wash at the nearby gas station. There was a certain thrill in getting on that conveyor belt and moving through all of the contraptions to get the auto clean. For a person who's never enjoyed amusement park rides, the car wash "ride" was probably the closest thing.

Never had the opportunity in Japan since I never drove a car there and most of my friends in the Kanto region are content with public transit, but apparently the approach to a car wash in my home-away-from-home is that the car wash itself moves while the car stays static. Quite the pleasant surprise, eh (price aside)?

Another pleasant surprise has to do with "Car Wash". Nope, not the 1975 funk classic by Rose Royce, but a track from Yoko Nagayama's（長山洋子）5th original studio album, "F-1" from September 1988. Yes, this is indeed the same Nagayama who has been known for the past few decades as a dynamic enka singer, but do remember that she did have her aidoru phase in the 1980s. Still, I guess that she wanted to put a little more high octane in the engine for "F-1" (har-de-har-har) with singer-songwriters including Masayuki Suzuki（鈴木雅之）, Yasuhiro Abe（安部恭弘）and Meiko Nakahara（中原めいこ）...all of them well-versed in the City Pop genre...putting in contributions.

So that's what I get with her "Car Wash" which was composed by Martin Suzuki and written by singer-songwriter and essayist Mebae Miyahara（宮原芽映）. And yet I hear quite a bit of Junko Yagami（八神純子）circa late 1970s/early 1980s, even in Nagayama's delivery. Plus, I will always enjoy that Seinfeldian bass and a good set of horns. Good to hear Suzuki in the background, too. I'm not sure if this will be enough for me to invest in the album itself (if it's available) but seeing some of those above names in the liner notes does give me pause.
Posted by J-Canuck at 12:33 PM