Noelle's Favourite Songs From The 60's 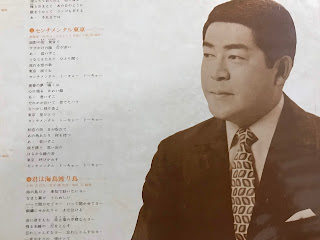 In the way of my selections per era, we've delved into the ancient 30's and 40's, progressed to the 50's, and we've now arrived at our next stop: the 60's. Besides the technology and the overall condition of Japan improving by leaps and bounds, another thing I've noticed about this era is that this was when the musical genres seem to become more distinct and not just simply be lumped into the umbrella categories of ryukoka or kayokyoku, and Western influences get more deeply ingrained into the melodies.

With greater musical variation in this period, it kind of goes without saying that the songs on this list will more or less show that - I mean, it's probably not as varied as I think, but there's definitely more than just enka in store here. As per the other articles, the songs aren't arranged in a particular order and I will add bits of lyrics which I like to the blurbs as well.

Disclaimer: These will be my picks on my favourites from the 1960's, so you may or may not find songs that you like or feel should be on here.

That said let's get on with the show.

Admittedly, I haven't been listening to this elderly vocal group all that much as of late. However, when I do want some Duke Aces (デューク・エイセス) and want to cleanse my palate from hardcore enka and, wouldn't you know it, modern J-pop, the first song that I will always choose is "Onna Hitori" (女ひとり). This installment from their ambitious "Nihon no Uta Series" (「にほんのうた」シリーズ) is one beautiful and rather therapeutic tune that wonderfully portrays Kyoto and three of its well-known temples. Ah, I wish I could see Duke Aces in the lineup above singing this song one more time.

From the thousand year old capital we take a trip down south to the little island off the coast of Kagoshima. Similar to "Onna Hitori", I find Yoshio Tabata's (田端義夫) take on the Amami Oshima minyo "Shima Sodachi" (島育ち) so relaxing just listening to it feels like I'm at a quiet beach soaking up the sun - not like I need anymore of it.

I try hard not to repeat any singer in my lists so that they wouldn't be jam-packed with the same handful of them for, as I said before, that'd be boring. However, Batayan is that wild exception I'm willing to make. Yes, I like "Shima Sodachi" that much, so much so that I so readily put it down here as I'm biting my fist as I gloss over a certain fellow with an "8" in his name and the one with a smile for the ages.

And from Amami Oshima, we come back to Tokyo for the Olympics.

Whoo! You can feel that ferocity emanating from that tiny figure! Madam Misora looks about ready to knock someone's block off. I believe I've said it before and I'll say it again: "Yawara" (柔) has got to be the manliest song sung by a woman of that time. The muscular and grand melody combined with Hibari Misora's (美空ひばり) moxie just makes for such a cool song.

Ah, the Wakadaisho. If there's one song by him that consistently gets itself lodged into my cranium, it's the Hawaiian-esque "O-Yome ni Oide" (お嫁においで). It's a simple and oh-so-catchy ditty with a cute premise, and that alone is enough to keep it running through my mind.

Unlike the other songs on this list my liking for "Yogiri yo Konya mo Arigato" (夜霧よ今夜も有難う) crept in slowly... like night fog. Sure, I was agreeable with it upon my introduction to Tough Guy, but with the right premise of me staying back in the safety of an almost empty class to finish up the daily assignment in the evening with a tropical squall battering outside and this jazzy number circulating through my earpieces, "Yogiri yo Konya mo Arigato" eventually became associated with warm comfiness and eventually one of my favourites.

I'm usually picky with covers of my favourite, often times to an unfairly biased level - you probably have noticed it in some of my earlier articles. But lately, I've been more open minded. However, the one song that I remain absolutely (and, perhaps, infuriatingly) obstinate about is "Hoshikuzu no Machi" (星屑の町), in the sense that Michi fits the song best and the best renditions are those that are closest to Michi's. I like this song very much for how atmospheric it is and for how Mihashi's silky and unique delivery adds that extra layer of wistfulness. And without Michi's voice, "Hoshikuzu no Machi" loses half its flavour.

We've now come to the last song on the list. You were expecting "Osho" (王将), weren't you? After all, I said it was my ultimate o-enka. But having already talked about it and actually having another Murata number I can't get enough of, I decided to go with the latter, that being "Meoto Shunju" (夫婦春秋). This sweet and heartwarming song about a man showing his appreciation for his wife sung by one of the most gruff and imposing (in demeanor) fellows is absolutely adorable. I love the manly but gentle melody that goes along with it, and that "Omae" with that sheepish Muchi grin always melts my heart. 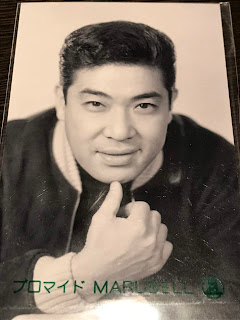 I have to say, this is probably one of the most un-Murata pictures I've seen to date but at the same time, it's also very Murata.

And on that sweet note I end my list of favourites from the 1960's. It was quite good fun planning these lists, and I hope you enjoyed as much as I did writing it. And on hindsight, I realise that a good number of the songs hear I'd easily put into an overall top 10 or 20. I might continue with this series of articles for the following decades, but we'll see how that goes. But that aside, what are your favourite songs from the 60's?
Posted by Noelle Tham at 10:19 AM