Quite some time ago (it was meant to be "Not too long ago", but I got a horrendous writer's block for this article at that point in time), commenter Hanibo mentioned that Akira Matsudaira (松平晃) was one of the few popular ryukoka stars that hadn't yet been profiled on KKP, so I thought that now would be a good time to give him a label of his own, and what better way to start it than with the song that brought him into fame, "Circus no Uta" (Circus Song) from 1933.

For some reason, I was never keen on circuses. I mean, they have animals I like perform tricks and performers doing death-defying stunts, but I could never get into it. I wonder if it was a subconscious aversion to it after I got traumatized by "Dumbo" when I was young (especially since I love elephants)... and the dang clowns. This aversion was probably also what kept me away from "Circus no Uta", easily one of the evergreen ryukoka to come out of the 30's and one of the great Masao Koga's (古賀政男) pride and joy.

Well, but after the aforementioned prompt and after watching an interview of Koga, I finally set my aversion aside and gave this Matsudaira hit a good listen. I got to say, it's very... circus-y... in the sense that it's jaunty and what I believe is the clarinet fluttering in from time to time adds a sort of whimsical edge to a score that is heavy on the accordion. This accompanies the equally renowned Yaso Saijo's (西條八十) words about a carny who's bored with his roving lifestyle and yearns to go home to his special one.

With two of the old kayo's big wigs having worked on "Circus no Uta", it was no wonder why it did as well as it did. But prior to its success there were some complications: for one, Koga also had a severe writer's (creator's?) block when it came to having to complement Saijo's forlorn piece. Two, the one whom this tune was originally written for, Ichiro Fujiyama (藤山一郎), moved to Victor from Colombia Records, so they had to find a replacement in then newcomer Matsudaira. In spite of all that, Matsudaira managed to make it work and we have the classic we know today that has been covered countless times by enka singers in the following decades.


There were so many renditions to pick from, so I decided to put the one by Koga's last student, Eisaku Ohkawa (大川栄策). In this one, you can enjoy a slightly more modern take on the music while still retaining the quintessential Koga-sound.


Before we end off this article, here an introduction to Matsudaira: Born Tsuneharu Fukuda (福田恒治) on 26th June 1911 in Saga prefecture, he had quite a rough road on his way to becoming a singer. First he faced objections from his father, then he had some financial difficulties that put a strain on his musical education when he did go up to Tokyo. However, Matsudaira did manage to get into the music scene through Nitto Records via a friend's recommendation, and debuted as Shizuo (?) Ohkawa (大川静夫) in 1932, all while still in school. All the way up to the next year, (from what I understand) he jumped from record company to record company in an effort to produce a hit, until he landed in Colombia, where he encountered "Circus no Uta" and the rest was history.

In the way of his name, he underwent about half a dozen name changes, one per record company, prior to his breakthrough until he finally settled with "Akira Matsudaira" in 1934. In this way, he kind of reminds me of Toshiro Omi (近江俊郎). 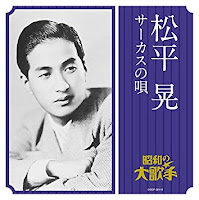