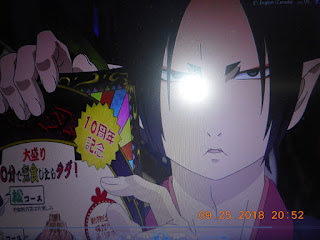 I shouldn't be writing this at this time. The reason is that I should have been enjoying the first session of the biweekly anime routine with my friend today. However with the wickedly cold conditions (though it is very sunny out there) outside and the fact that I would have been exposed to the elements for a total of one hour was enough for me to tell my friend last night that I would have to cancel until things warm up some more next week. Yup, I know I'm a Canadian but at my age and burgeoning elderly irritability, -18 degrees Celsius with 70 km/h gusts will no longer do for me.

So in place of the anime viewing, I am putting up an anime article via the "Hoozuki no Reitetsu"（鬼灯の冷徹...Hozuki's Coolheadedness）series. This would be the ending theme for the 2018 portion of the second season, "Jigoku de Hotcake" (Hotcakes in Hell) as sung by Sumire Uesaka（上坂すみれ）, who has a minor role in the show. As a Canadian (who is no longer as impervious to cold as he once was), I was already sold from the title alone since I will take anything hotcake-y on a Sunday with plenty of butter and maple syrup.

Knowing that Uesaka had also sung the more sedate "Riverside Lovers" from the 2017 portion of Season 2, I was taken aback when I first saw the ending credits for 2018 with all of that CG and then Uesaka's high-energy "Jigoku de Hotcake". I'm not quite sure whether the arrangement and composition by Chell Watanabe（渡部チェル）was meant to be some sort of tribute to 90s synthpop, but if there were a disco in Hozuki's region of Hell, then I could imagine this being played.

The lyrics were provided by Nagae/Hisae Kuwabara（桑原永江）. Unfortunately, I couldn't find a full take of "Jigoku de Hotcake" online, but the song is so full of power as it is, I can settle for the TV version for now.
Posted by J-Canuck at 2:33 PM