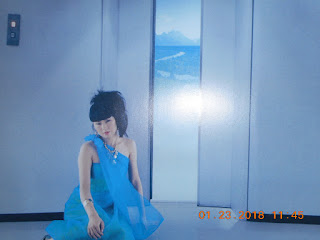 Good heavens...when did I first hear about Mioko Yamaguchi（山口美央子）? As I was frying up those Friday steaks for the family, I was scouring through my brain and realized that it was "Kayo Kyoku Plus" collaborator nikala back in February 2014 who had first introduced me to her work as a singer. I mentioned to her that I had seen her name bandied about on various liner notes as a songwriter but hadn't known about her time as a singer. So it was with great gratitude that I found out about Yamaguchi and her brand of pop which in the 1980s ranged from technopop to City Pop to dreamy pop.

Then just last year, I found more of her material on YouTube including the catchy "Satemo Appare Yume Zakura"（さても天晴れ 夢桜）from her 1983 album "Tsukihime" when Toshi let me know of his establishment Logic Store and that all of her albums recorded up during those high-flying 80s were now available on CD. Was very happy to have gotten them!

Several weeks ago, I did find out that Yamaguchi was putting out a new album for the first time in over 30 years but with all that was going in terms of the backlog on the blog and the usual Holiday stuff, I had put things on the back burner as far as the Yamaguchi file was concerned. Luckily, Jazm gave me a friendly nudge about this new album "Tokisakashima", her 4th, that had been released for download in December last year but has been available on CD for the past couple of days.


I've decided to go write about the title track from this album which had Yamaguchi and songwriter and synthesizer programmer Hideki Matsutake（松武秀樹）working together once more. "Tokisakashima" starts off with some neighbourhood sounds on a sunny day before things take a left turn into a seemingly palate-cleansing (I would have said ear-cleansing but that sounds a bit gross) soundscape of Yamaguchi's voice and somewhat spiritual ominousness.

Then just at the point when it sounds like things are getting a little too long in the soundscape, like a door opening, we come into this lovely piece of introspection with the familiar vocals of Yamaguchi. Most likely it's not the neighbourhood anymore but somewhere deep in the forest next to a mysterious pond as can be seen in the thumbnail above (would actually like to know where that shot was taken).

The music is rich and organic (quite earthy) even though according to the Japanese-language interview with Yamaguchi at Real Sound, it's basically all synthesizers as the instruments outside of the singer and some sampling. Indeed, she has maintained her title as the Synth-Diva. In fact, Jazm and I came to the same observation in that her vocal delivery hasn't changed one iota despite the three decades-and-change that have passed since her last album. It's almost as if she stepped into a TARDIS (Google it, any of you non-SF fans) in 1983 and then hopped over to 2018!

One question that I had was with the title itself. What and where was Tokisakashima? Well, in the interview, Yamaguchi answers that the word simply means "Time is reversing". I found out that she was quite the fan of the RPG "Chrono Trigger" (which surprised and delighted Jazm and myself; I think she was blushing a bit at the confession), and then while she was knocking her head to come up with the title for the album, she saw a book on the shelf by 19th-century French author Joris-Karl Huysmans titled "À rebours". The title is translated into English as "Against Nature" and "Sakashima" in Japanese. After that, it was a matter of pulling off a Reese's Peanut Butter Cup maneuver with the ideas to come up with "Tokisakashima".

At this point, I will stop it right here and once I purchase my copy of the album, I will talk about some of the other tunes on it. But let me end it by stating that I'm glad that Yamaguchi is back in town, so to speak. Furthermore, I can state that this is the first article on a 2019 number!
Posted by J-Canuck at 8:22 PM