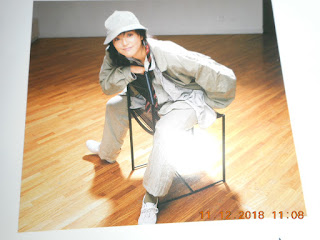 According to kayo tradition, perhaps it's not the best thing to go out on a foggy day or night. There may be reduced visibility but I think it's something somewhat more existential that will collide with you.

Over the years of writing on this blog (coming to 7 years later next week), I've learned that there have been a number of songs in the late Showa Era with the word kiri（霧）, or fog, in the title. Sometimes, the song describes a fateful encounter but I've often felt that those encounters involve the end of a romance.

Such is the case with the beautifully and freshly delivered "Kiri no Hi no Dekigoto" (What Happened on That Foggy Day) by 70s aidoru Hiromi Iwasaki（岩崎宏美）. This is a track from Iwasaki's 3rd album "Hikousen"（飛行船...Airship） whose tracks were all written by Yu Aku（阿久悠）while this particular track was composed by Yusuke Hoguchi（穂口雄右）. Despite the title and the subject matter of an ended relationship, Hoguchi's arrangement keeps things going briskly at a cool beat provided by that lovely bass. In fact, I think the feeling of the song almost puts things in the wheelhouse of the folk/pop band Off Course（オフコース）which knows a thing or two about former flames and lost love.

As for "Hikousen", it peaked at No. 3 on Oricon. I gather that now I have another artifact of nature to symbolize breakups along with dead autumn leaves.
Posted by J-Canuck at 2:40 PM