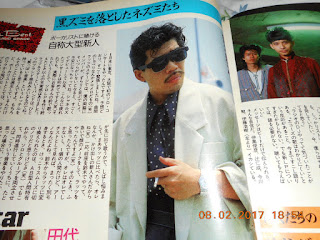 It's been a while, Martin. Good to see you again!


For Masayuki Suzuki（鈴木雅之）fans, this could be one of the rarer pieces of the collection since "Long Run", his November 1988 single, was never placed on an original studio album, and I'm unsure whether it was even included in any of his BEST compilations.

I think it also has a certain distinction in that it comes across to me as a pop song overall. Usually with Martin's music, I get that City Pop/R&B sense immediately. However, with "Long Run", although it gently pushes into areas of the aforementioned genres and even jazz, it stays in the pop genre. It's still his wonderful voice so the whole thing, written and composed by Norie Kanzawa（神沢札江）and arranged by Yasuhiro Abe（安部恭弘）, is very pleasant to listen to.

Kanzawa's lyrics are even special because it's the first time that I have ever heard any Japanese (and English) song to refer to the movies "MASH" and "The Sting". To explain, the story is that it's about two lovers who share a common affinity for watching movies at the local theatre, and Suzuki sings that the relationship is looking like it's gonna have a long run...perhaps as long as the very first "Star Wars" did at the Fairview Theatre relatively close to my home. That was for 2 years straight everyday. Literally speaking, though, I hope that the relationship in "Long Run" lasts for many more decades.
Posted by J-Canuck at 4:35 PM