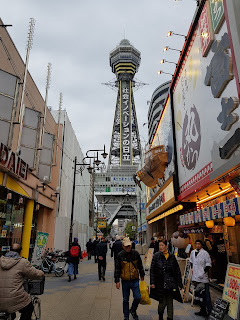 Quite some time ago I got a re-released 2011 version of Hachiro Kasuga's Osaka song album, "Kasuga Hachiro Osaka wo Utau" (春日八郎 大阪を歌う... Originally known as "Osaka Joucho" (大阪情緒)). I was aware that the album contained both his original works as well as covers, but the jewel case description and lyric booklet, being the "most helpful" one I'd ever come across, had me doing a guessing game to see which was which. Some were straightforward, like "Soemoncho Blues" (宗右衛門町ブルース), but some had me absolutely clueless - "Pat, I'd like to buy a vowel."

Case in point, "Osaka Gurashi". It was the first track in the album and the first I listened to as I ripped the CD on to my laptop. When I heard the smooth synths sliding at a leisurely pace, it came across as a typical enka song that's easy on the ears. Coupled with the effortless way Hachi hits those notes at polar ends of the a couple of octaves, "Osaka Gurashi" sounded like the quintessential Kasuga-bushi. However, for some reason, in spite of how much I liked it, I found that he sounded quite awkward at times. Certain portions, like the last stanza, which I felt should have a gruffer, manlier edge - because, y'know, Osaka pride - sounded so tame in Kasuga's modulated delivery. So I begged to differ on the full-on Kasuga-bushi and thought of someone more... abrasive. Hideo Murata (村田英雄) popped in, but at the same time he didn't seem to fit the bill.


And then I finally decided to not be lazy and unravel this mystery by looking up "Osaka Gurashi" online. The first result brought up the Mood Kayo crooner with the voice of velvet, Frank Nagai (フランク永井). Because of my aforementioned impression of the song, I quite literally went, "Whaaat? For real?" But other results said loud and clear that Nagai was, indeed, the original singer.

I listened to his rendition still rather skeptical, but I assented when the music hit my ears. Unlike Kasuga's cover, Nagai's arrangement had a slower tempo that, I suppose, can be likened to the languid flow of the many waterways that criss-cross Osaka, and a heavy emphasis on the horns which, coupled with Nagai's soft vocals, gives an overall nostalgic atmosphere to "Osaka Gurashi". With it sounding like this, I could more or less understand how this was under Nagai's repertoire. However, objectively, I still do prefer Hachi's take, which I wish was available online so that I could show you guys what I mean.

Anyway, "Osaka Gurashi" was made in 1964 with its music composed by Masao Ono (大野正雄). Writing the words was Takeo Ishihama (石浜恒夫), and it's as Osaka as one can get with places like the renowned Hozenji Yokocho, the strange-looking Tsutenkaku tower, and the Shogi whiz Sankichi Sakata being thrown into the mix. Being as it is, I'm quite surprised that it's not as well-known a Go-touchi song (ご当地ソング) as something like "Osho" (王将) or "Tsuki no Hozenji Yokocho" (月の法善寺横町).


(1:06)
As with most of Nagai's songs, "Osaka Gurashi" had been covered by actor-singer Makoto Fujita (藤田まこと). Frankly, I also do prefer Fujita's version to the original as his gritty and guttural delivery does fit bill better - I suppose he was the one my brain was trying to find when I was playing my "Who Sang This Song?" guessing game.