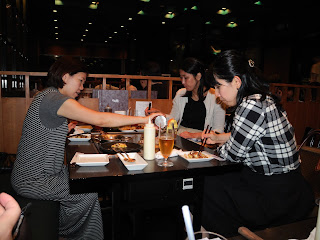 These are some of my friends when we were all up at Chibo's, an okonomiyaki restaurant at Ebisu Garden Place some years ago. Enjoyable place and even now in Toronto, we're still waiting for a similar establishment.


Although "Japanese Woman" is a track on folk/urban contemporary duo Bread & Butter's（ブレッド&バター）1980 album "Monday Morning", there is still that 1970s City Pop feeling in the song with some added skip to the proceedings. I love the meowing guitar and Satsuya Iwasawa's（岩沢幸矢）playful delivery along with the strut in the refrain as he sings about the duality in the Japanese woman...quiet and demure on the outside but powerful and fiery on the inside. That's been given as the description for women from Kyoto but I can let you know that this can describe any woman in Japan...Gunma, Osaka, Tokyo...wherever. Plus, Mom's pretty feisty, too.

Fumiko Okada（岡田冨美子）provided the lyrics while Satsuya came up with the music. The song was also released in the same year as a single.
Posted by J-Canuck at 2:27 PM