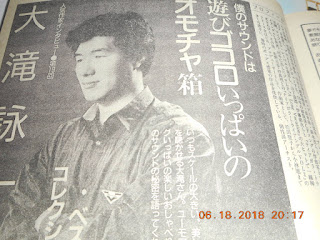 Y'know, when I think of the term peppermint blue, the first thing that comes to mind isn't a lovely cocktail but a certain type of toothpaste that perhaps 9 out of 10 dentists would recommend.


And yet, the late singer-songwriter Eiichi Ohtaki（大瀧詠一）created this wondrous summer paradise around the title of "Peppermint Blue" as a track for his March 1984 album "Each Time". With Ohtaki behind his famous music and his old bandmate from Happy End, veteran wordsmith Takashi Matsumoto（松本隆）, taking care of the lyrics, the former is in prime balladeer mode as he sings Matsumoto's lyrics of a woman enjoying a beach vacation, getting that suntan and sipping on that titular cocktail with perhaps blue curacao.

There's something about an Ohtaki song that can feel as cooling as a Japanese summer wind chime, or even better, a tall glass of Calpis. Perhaps it's that gallant falsetto of his, those sweet strings or the layering of his backing vocals. At the same time, with "Peppermint Blue", listening to it in the hammock or on a beach chair, one can be swept back to earlier days with any stresses hopefully being swept away in the time slip. The interesting thing I also picked up is that every time the refrain comes to an end, there is literally a note of uncertainty as if hinting that the paradise isn't something that will last. It'll be back to reality and the job, maybe.