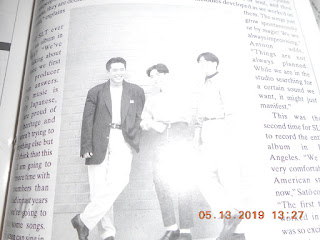 One of my prides and joys in my collection of Japanese music has been the band Sing Like Talking. I've enjoyed their music from the late 1980s and 1990s but when I was listening to excerpts of their relatively more recent material going into the 2000s, my impression was that Chikuzen Sato（佐藤竹善）and the boys were veering into a much more rock direction, so I've ended up going into my own direction of purchasing their BEST compilations instead.


I may be enticed into rethinking my decision on the basis of this one song by SLT. "One Day" comes from their 10th album, "Metabolism" from September 2001. Written and composed by Sato, this has a bit more rock flavour than some of their earlier hits especially near the end but it hardly has the band members smashing their guitars onto the stage. There's a bit more of a buzz than anything else in the arrangement; otherwise it's the comforting and well-delivered material that I've always heard from the band.

"Metabolism" was another hit album for Sing Like Talking, peaking at No. 9 on Oricon. I'll have to try out some more of the tracks and then make the purchase.
Posted by J-Canuck at 4:35 PM