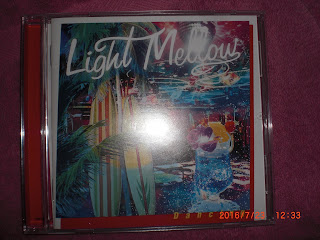 It would be logical for a compilation album titled "Light Mellow ~ Dancing" to start off its 73 minutes and change with a song titled "Dancing".


And sure enough, that is indeed the case here. "Dancing" was originally a track on Masahiro Kuwana's（桑名正博）third album "Tequila Moon"（テキーラ・ムーン）from July 1978. Beginning with what sounds like a slightly slowed-down Steely Dan riff, "Dancing" then goes into full dynamism with Kuwana's music and vocals producing a work that sounds mighty enticing for Gino Vannelli to try out. Takashi Matsumoto（松本隆）is the fellow behind the lyrics hoping for that young lady to come up and ask for a dance somewhere in the heart of Osaka.

There are also some pretty famous session musicians in on the fun as well such as Jake H. Concepcion on the saxophone, Shin Kazuhara（数原晋）on one of the trumpets, and Kuwana himself getting happy on the electric guitar and the 12-string guitar according to the liner notes in "Light Mellow ~ Dancing". Even his sister, Haruko Kuwana（桑名晴子）, is helping out on backing vocals. Sangrias for all!
Posted by J-Canuck at 8:01 PM