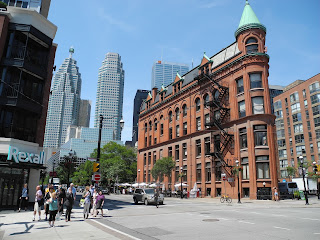 Decided to go with the Gooderham Building down on Front St. for the thumbnail. Just because. Plus, it looks all summery there.

I picked this one up into the backlog list since I liked the music video and simply the music itself. This is "Summertime Love" by the band Shiggy Jr. led by guitarist Shigeyuki Harada（原田茂幸）and completed by vocalist Tomoko Ikeda（池田智子）, bassist Natsuhiko Mori（森夏彦）and drummer Kazuma Moroishi（諸石和馬）. All four of them are graduates from the prestigious Waseda and Aoyama Gakuin universities in Tokyo.

Will be more than happy to admit that I'm a sucker for the new brand of Japanese urban contemporary pop that perhaps fans and musicians would probably prefer to refer to this music of the last several years as rather than neo-City Pop. Moreover, I definitely fall easily and hard for the graphics that symbolize my favourite decade of music, which is the 1980s, and the video for "Summertime Love" has plenty of that...plus adorkable dancing. It's kinda/sorta Vaporwave-y in looks although the premise seems to be sweet American after-school sitcom.


For me, "Summertime Love" which was the debut single for Shiggy Jr. released in June 2015 reminds me of Sakanaction's "Wasurerarenaino"（忘れられないの）because of that lively uptempo disco beat, the strings and the percolating guitar. And from some of the other songs that they've released, it seems that Shiggy Jr. is all about the good times of the past and the present.

According to the J-Wiki article on the song, leader Harada, who wrote and composed the song, was feeling some mighty pressure in its creation since the band's debut single would also become the advertisement song for a part of the famous Nagasaki theme park, Huis Ten Bosch. He really wanted to get something good out there that would also immediately peg the song as representative of what Shiggy Jr. was all about. I would say that Harada and the guys succeeded since it then also became temporary opening and ending theme tunes for a few TV variety shows. "Summertime Love" became their biggest hit by peaking at No. 28 and is included in their debut album "All About Pop" which was released in October 2016. That peaked at No. 29.

Shiggy Jr. started up in 2012 but announced their breakup earlier this year in June.