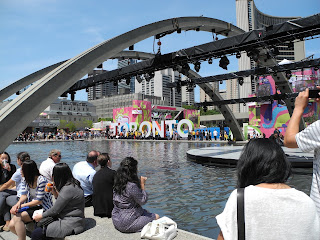 For my final article on the final day of August 2019, I was inspired by a weekly TV Asahi program titled "Sekai no Mura de Hakken! Konna Tokoro ni Nihonjin"（世界の村で発見!こんなところに日本人...Discovered in the World's Villages! A Japanese in This Sort of Place）. In each episode, celebs go around the world to "search" for a Japanese national who is currently working in some remote part of a country ranging from Russia to The Seychelles. As with any variety show in Japan, everything is planned to the letter including most likely letting know the target of that search beforehand that he/she will be visited for an interview as to why he/she is there, so any angst (extreme weather, language barrier, etc.) that the celeb feels is probably real but he/she has to follow through on the plan to be able to get a full segment in.

Tonight, we got to see an episode featuring actress Yuko Asano（浅野ゆう子）, although the above video is from another adventure on the show that she had in Sweden. I couldn't find a YouTube video with tonight's episode but she had been assigned to search for someone located in Halifax, Nova Scotia, Canada, but somehow she found herself much to my surprise in my hometown of Toronto!..almost 2,000 km short of target. In fact, she was asking folks for some help at Nathan Philips Square which you can see at the very top. I'm just trying to imagine someone as famous as Asano right in front of City Hall! Anyways, she eventually found the person out in the Maritimes.


So, in honour of this visual opportunity, I'm going to show off a song that's been on the back list for a while with the then-16-year-old Asano singing "Kokoro wa Karappo" (My Heart is Empty) from her 4th album released in November 1976, "Yuko In Disco".

Written by Jun Hashimoto（橋本淳）and composed/arranged by Mitsuo Hagita（萩田光雄）, "Kokoro wa Karappo" certainly has those disco elements with the strings and bass but I'm not sure if it's a fully disco tune. That boogie-woogie piano takes me out into some very jolly 70s pop, and then there is a section which seems to pull me out into the stratosphere for a brief mellow flight before taking me back to Roppongi. There is no melodic meandering though. I do get quite the exciting but not panicky ride; Asano's heart may be empty but my ears are full.

Not even quite sure if I would even categorize "Kokoro wa Karappo" as an aidoru tune per se, but considering her age and the fact that she was probably still known as a teenybopper singer in 1976. I've put it down as such. Since then, Asano has become far more famous as a tarento and actress.

As a postscript which may surprise my family, although we still get "Sekai no Mura de Hakken! Konna Tokoro ni Nihonjin" on TV Japan fairly regularly, I just found out that the show finally finished its run earlier this year.
Posted by J-Canuck at 9:56 PM