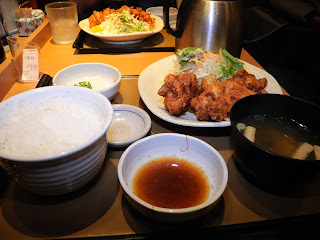 One of my favourite forms of dinner time in Japan: eating out at a branch of Yayoi-ken（やよい軒）. This is one of those restaurant chains where you put your bills and coins into a ticket vending machine after making your selection. Of course, whenever I visit Japan, I must have my karaage teishoku with bottomless bowls of rice, miso soup and tea along with the rest of the sides that come up with my fried chicken.

Mind you, when I was living in the nation, I couldn't afford to eat out every night obviously. However, I did like to cook when I had my days off, so I did a lot of stir-fry, homemade Sweet N' Sour Chicken, Taco Rice, and niku jaga among other dishes.


Unfortunately for Ritsuko Kurosawa（黒沢律子）, her "Dinner Time" isn't a happy one. Her dinners have apparently been with a cad who's been far more style over substance, and she's finally at her wit's end. But dang, the music infusing this frustrating story is really nice.

"Dinner Time" is the lead track from her June 1993 album "Dish", and this is the second article in a row for Kurosawa that I've written about a song from that release. The lyrics by Miwako Saito（斉藤美和子）are as bitter as goya but I do like the bouncy melody by Ichiro Hada（羽田一郎）that goes with them. I wouldn't mind listening to this one over dinner, and I know that I will be having a far more satisfying repast than she has had. 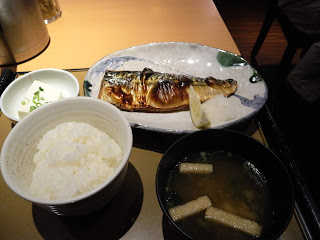