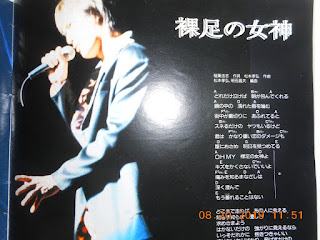 When I was reading about the subject of this article in J-Wiki, I discovered the term Being Boom. In terms of 1990s J-Pop, I knew about the Tetsuya Komuro（小室哲哉）boom and then the later rise of Hello Project going into the 2000s but didn't know about this exact term. However, I knew about the success of the artists it depicted. Being Incorporated is the entertainment juggernaut that represented acts such as TUBE, Zard, Maki Ohguro（大黒摩季）, and Wands. And so, I went "Ah...naruhodo".


Of course, another mighty engine in the Being steamroller is B'z through the subsidiary Vermillion. Anyways, what got me to start the article on "Hadashi no Megami" (Barefoot Goddess) was finding its lyrics in one of my ancient copies of "Young Song", the booklet of the hit songs of the time which was always inserted in the monthly editions of "Myojo"（明星）, the famous music magazine. The thumbnail above is a shot of that page for those lyrics.

"Hadashi no Megami" was B'z's 13th single from June 1993 and what can I say...it's a darn cool tune. As usual, it's vocalist Koshi Inaba（稲葉浩志）taking care of the lyrics and Takahiro Matsumoto（松本孝弘）behind the music and arrangement. The story here is Inaba reassuring the titular barefoot goddess that though the world may be full of snakes and broken ladders ready to betray her in love as has been the case recently, she'll be able to push through and become stronger for it when the sun rises once more.


What got me hooked onto the song was that persistent thrumming throughout it, kinda like the world's most dependable vehicle to take folks out of harm's way. Usually with a B'z tune, I expect a lot of action and drama, and with "Hadashi no Megami", I also get the addition of an optimistic vibe. Inaba and Matsumoto promise a smooth ride and a happy ending over the horizon.

Not surprising as well was the fact that the song became yet another No. 1 for the duo for two straight weeks in June 1993, ultimately selling over 1.7 million copies and becoming their 6th straight million-seller which broke the record of consecutive million sellers that had been held by 1970s duo Pink Lady. "Hadashi no Megami" would become the 5th-ranked single of the year and is currently B'z's 4th-most successful hit. In terms of the Oricon historically successful singles, it ranks in at No. 47. It also first showed up on an album via their first BEST compilation "B'z The Best 'Pleasure'" from May 1998, which is in itself a historic album by being the 2nd-highest release in Oricon history.


Finally, as the cherry on the top of this sundae, "Hadashi no Megami" even became the commercial song for the Toyota Corolla Levin.
Posted by J-Canuck at 2:32 PM