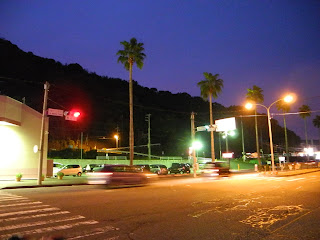 Around 1987, guitarist/composer/arranger Shigeru Suzuki（鈴木茂）must have contacted a whole slew of his singing buddies who had dabbled in the mellow sounds of AOR and asked each of them to create a song of that genre, but without any lyrics. In other words, they were to come up with instrumental tracks, and Suzuki would produce and arrange all of the songs.

The result was a trio of compilation albums under the umbrella title of "Sunset Hills Hotel", and all three of them were released in 1987 with the first being "Sunset Hills Hotel". I was only aiming to pick out one song from the album, but decided to cover the whole of Side A because of the composers involved. Thankful to have found the album, by the way, through Rare Japanese Sounds.

So far, listening to the first side of "Sunset Hills Hotel", everyone kept their promises and kept their mouths resolutely closed which is unusual since in at least a couple of examples, their voices are so recognizable and distinct.

Track 1, "Night Flight" by Suzuki himself begins very quietly as if I were going to experience something very ambient. But then the serenity gradually segues into an innocent tete-a-tete between a romantic piano and the introductory synthesizer before the guitar and percussion come in like a wave. David Foster and TOTO were the names that automatically got thrust into my head as I was hearing this. "Night Flight" does indeed sound like it was made for a night flight as the passengers are asked to buckle up and prepare for takeoff before heading off on their tropical vacation late at night.

At 5:16 is "Cafe on the Wave" by Yoshitaka Minami（南佳孝）. Of course, he is one of the artists that I had expected to hear in full voice. Instead, though, he provides a softly tropical tune, sine voce, with just a saxophone and a piano leading the island tour. However, perhaps to keep things trans-national, there is even what sounds like an Italian mandolin so that there is a bit of that European representation. There are two saxophonists involved in "Sunset Hills Hotel", and one of them is the late Jake H. Concepcion. I'm betting that he's the one manning the sax here.

Jin Kirigaya（桐ヶ谷仁）then gives us the third track "Sweet Reservation" at 9:49 which sounds so sweetly AOR that it could easily have been included in any of the American AOR compilation albums that I used to collect when I was living in Japan. There's another lovely and even bluesier sax solo here. The Foster and TOTO feeling is bubbling up here, too.

14:35 is Taeko Ohnuki's（大貫妙子）contribution to "Sunset Hills Hotel" with "6:30 PM Breeze". Not only is it unusual since she doesn't sing but it's the first time that I've heard a song by her that incorporates some of that old-timey jazz and Hawaiian at the same time. It sounds so sleepily comical that it could accompany that slightly loony side character in a movie after he/she gets cut off at the bar and ambles back into the hotel. For some reason, I think that "6:30 PM Breeze" could even fit a typical Studio Ghibli movie soundtrack...maybe it's the slightly tipsy trumpet.

The last track on Side A, and therefore my final contribution to the article, is "West Beach Drive" by Ginji Ito（伊藤銀次）at 19:40. West Coast AOR and Yumi Matsutoya（松任谷由実）circa 1980 come to mind as I hear this. There's an interesting combination of baritone sax and electone before another saxophone comes strolling in that makes up the arrangement. Then a jazzy piano literally crashes the party while shooing in a harmonica.

In addition to Concepcion, there are a lot of other notable musicians involved in "Sunset Hills Hotel" including Shin Kazuhara（数原晋）on flugelhorn, Masataka Matsutoya（松任谷正隆）on piano, and Tsuyoshi Kon（今剛）on guitar. Not sure how the album was received when it was first released in 1987, but the concept and the personnel involved have gotten me interested enough for me to try and obtain it. As I kinda hinted for Ohnuki's "6:30 PM Breeze", it has that feeling of a soundtrack for a movie or TV show highlighting the kooky characters of a hotel known as the Sunset Hills. I already have that need to wrap a pink sweater around my waist and buy a bottle of Perrier.

I'll have to talk about Side B sometime soon as well. In the meantime, the later two albums are "Sunset Light Cocktail ~ In Sunset Hills Hotel" and "Sunset Hills Hotel ~ Reservation Calendar".
Posted by J-Canuck at 3:23 PM