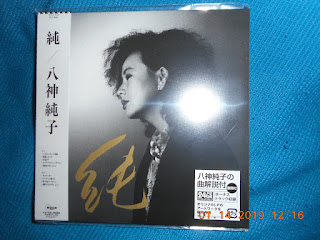 The end of March this year saw me writing about Junko Yagami's（八神純子）8th album "Communication" (February 1985) which I thought was the beginning of a new phase in the singer-songwriter's style. She was going for a more American R&B sound. Now, I'm going ahead with her 9th album which came out nine months later in November, "Jun". Instead of that wonky "Communication" cover of Yagami having her legs stretched out like taffy, "Jun" has Junko appearing far more wistful in a black-&-white profile shot with a stylized version of the title just next to her.

I've already written about one track from "Jun", "Matenro no Hurricane"（摩天楼のハリケーン）which is this synth-heavy but silky song of intrigue. As usual, Yagami wrote and composed most of the tracks on the album except for two.


Although I found "Jun" continued the R&B from "Communication", it  was recorded in London and perhaps Yagami also picked up on some of the New Wave aspects, starting with the first track itself, "Baby Star no Higeki"（ベイビースターの悲劇...Tragedy of a Baby Star）. Reading the lyrics, the song can be compared to Mariya Takeuchi's（竹内まりや）"Natalie" in that both songs deal with women who wanted to hit it big in show business...and did so, but at a great cost. While Takeuchi gives a bittersweet and sympathetic country cautionary tale, Yagami's take on the tragedy of young stardom seems a bit colder, perhaps even mocking, in an "I told you so" way.


Track 2 is "Jama Shinai de"（邪魔しないで...Don't You Mess With My Man）, the story of a woman telling all other rivals to keep their hands off her guy. He may look like a playboy but she insists that he's really just a button-down serious type and she'll be his armour. Point taken. A good dollop of synths in here, and I like how they start out nice and light before the lyrics declare the woman's permanent stake in the lad when those synths actually start growling.


"Reach Out In The Night" is one of two tracks on "Jun" that was written and composed by Yagami's husband, J.J. Stanley, and according to the liner notes in the album, Yagami remarked that when she was recording this all-English duet in the studio, the president of the record company, Alfa Moon, burst in and exclaimed "What IS this song?!" Apparently, he was duly impressed. This is quite the makeout ballad; perhaps people like Isaac Hayes would have put their thumbs up.


"Sailor no Tabidachi"（セーラーの旅立ち...A Sailor's Voyage）is the result of Yagami's wish to provide a bit of storytelling into her song, and for the first minute and change, there is a mix of jazz and R&B (almost reminding me of her late 1970s period) before Yagami comes in with an echo to relate the tale of a sailor going out to war and perhaps never returning. The interesting part happens in the middle when war drums start pounding and a more contemporary beat returns. Unfortunately, I have never been able to catch her in concert, but I could imagine that "Sailor no Tabidachi" would be one of those songs on the playlist in which it's just the singer by the piano on a darkened stage with just a spotlight on her. For some reason, the synth toodling that pops up here and there had me thinking Europe's "The Final Countdown".


The final two songs on "Jun" happen to be the album and single versions of "Suteki Downtown Jimmy"（素敵ダウンタウン ジミー...Wonderful Downtown Jimmy）, with the single version added as a bonus track for the 2012 re-release. According to those liner notes, Yagami has enjoyed playing this pulsing pop/rock song about Jimmy, the quintessential man about town, in concerts, and it had been her hope at the time that if she and J.J. had a son, then he would end up like Jimmy. Well, they did have a son, Noah, but then she hinted that he didn't exactly turn out the same way.

"Suteki Downtown Jimmy" was released as Yagami's 20th single in November 1985 with the aforementioned "Reach Out In The Night" as the B-side.

I've noticed that unlike the previous "Communication", I didn't place any City Pop tag in the Labels for "Jun", and I didn't really pick up on anything that really sounded like Japanese City Pop in the album. So perhaps, the transition in musical style was complete here. Anyways, "Jun" peaked at No. 22 on Oricon. I'm definitely happy to have picked up this one as well as "Communication" since I had assumed that I missed my shot at getting them. Hopefully, someday I will get the same opportunities to get "Lonely Girl" and "I WANNA MAKE A HIT WIT-CHOO", her slightly earlier City Pop releases.
Posted by J-Canuck at 3:18 PM