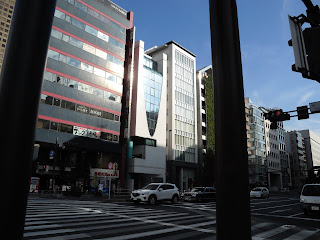 Strangely enough, while I was listening to this song, my memories returned to this photo from my 2014 Tokyo trip. This is a shot of traffic in the Daimon neighbourhood somewhere between JR Shimbashi Station and the Tokyo Prince Hotel, and it's one of the photographs in the collection that I enjoy the most because of the buildings in the background and how the late afternoon sunlight strikes their windows just so.


The song is "Love Time Good Time" by Rie Ida & 42nd Street（井田リエ＆ 42nd STREET）which is placed as the 2nd track on one of the band's three albums "Step in My Heart" (1980). I wrote my first article on Ida earlier this year in April since another song of theirs, "Party wo Nukedashite"（パーティーを抜け出して）got placed on one of the many "Light Mellow" compilation CDs.

Unlike "Party wo Nukedashite", "Love Time Good Time" isn't quite as groovy in the arrangement but indeed it's got an upbeat skip and strut in its shoes. However, like that song, Ida demonstrates some fine and hearty vocals (reminds me of Hitomi Tohyama/当山ひとみ) and there is also some nice punchy brass. In addition, I think the reason that I've associated it with that photo of Daimon up above is that it sounds like the type of song that I would like playing on the car radio while driving in that very area. It kinda fulfills what City Pop is all about...a good car drive of a song.

Hisako Nishio（西尾尚子）took care of the lyrics while 42nd Street guitarist Yoshihiro Yonekura（米倉良広）provided the bouncy music. As I mentioned, the original LP had been released back in 1980, but it looks like it got the re-release earlier this year at Tower Records.
Posted by J-Canuck at 7:58 PM