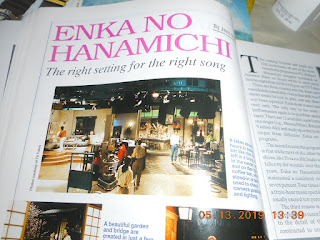 Last night was the return of NHK's "Uta Kon"（うたコン）after its summer hiatus, and it was once again the mix of the old and the new. At the beginning, I got to hear enka singers Yukino Ichikawa（市川由紀乃）and Konomi Mori（杜このみ）sing a Chiyoko Shimakura（島倉千代子）kayo that I hadn't heard before.


"Rindou Touge" (Woodland Path Ridge) was Shimakura's 2nd single from September 1955 and this was recorded when the Tokyo-born singer was only 17 years old. Along with Hibari Misora's（美空ひばり）"Ringo Oiwake"（リンゴ追分）which had been released a few years earlier, I realized that the kayo of the time wasn't all about heading to Tokyo or crying over one's sake. There were sentimental ballads that related the quiet life back in the countryside.


Written by Yaso Saijo（西條八十）and composed by Masao Koga（古賀政男）, "Rindou Touge" may talk about the contented environment but there are also words about the beloved elder sister who has since gone off to another town over that ridge with her new husband, so perhaps that is a wistful statement on how life evolves over time. However, the gentle tempo of the song reminds listeners that that life isn't in that much of a hurry.

Shimakura's 2nd single was another huge hit since it sold well over a million copies, but that apparently still paled somewhat against her debut single "Kono Yo no Hana"（この世の花...The Flowers of This World）from a few months earlier which sold around 2 million records. A very impressive one-two punch! Shimakura only sang "Rindou Touge" just once on the Kohaku Utagassen and that was in 1978 during her 22nd appearance on the New Year's Eve special.
Posted by J-Canuck at 9:49 PM