Yukiko Okada -- Walking in the Moonlight 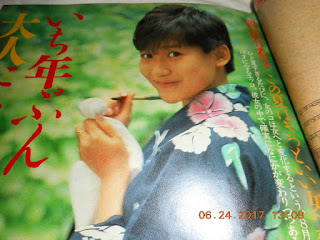 Looking at my Facebook feed a couple of hours earlier, I found out that it was 80s aidoru Yukiko Okada's（岡田有希子）birthday today (August 22nd)! She would have been 52 years old. Of course, I can only speculate but I imagine that she could have either continued on TV as a veteran tarento or actress.


Over the years among JTM, nikala, Marcos and myself, we've managed to cover all of Okada's singles, at least the A-sides. So, in tribute to her birthday, this time I'm going to go with a non-single track from her 2nd album "Fairy" that came out in March 1985.

"Walking in the Moonlight" is a mid-tempo ballad that sounds as if it had been created from the mind of Taeko Ohnuki（大貫妙子）, but it actually was composed by Mayumi Horikawa（堀川まゆみ）, sister of Reimy（麗美）, and then given lyrics by Yoshiko Miura（三浦徳子）. The song kinda dances about the genres; of course, it's an aidoru tune but the melody flits around a fair bit so sometimes it ventures into City Pop territory but then I wonder if it's a bit more technopop.

Miura's lyrics are about regret and uncertainty. The woman in the song is taking a lonely walk at night after having a fight with her boyfriend and ends up sitting on a swing in the neighbourhood playground. She knows full well that she loves him and he loves her but would appreciate it if he could say express his feelings of love somewhat more, although she admits that she may have overreacted to the entire situation. All the while, Yukko's tenderhearted delivery comes through clearly. There is a similarity with Seiko Matsuda's（松田聖子）vocals but Okada's voice is still distinct.
Posted by J-Canuck at 10:05 PM