To be honest, I find this song a little odd... but in a good way. With the soft trumpets and Broadway feel to 'Hoshikuzu no Machi' (Town of stardust), Michiya Mihashi's (三橋美智也) Enka voice seems out of place as I would usually think that someone else with a lower vocal delivery would be singing this type of song. But it actually worked out quite well, especially since he's able to bring out that certain element of loneliness in it.

Another thing that I find rather amusing is that 'Hoshikuzu no Machi' presents me with two images in my head that have quite the difference. One being having a lighter, happier mood to it, the other more forlorn... which is strange since that no song has ever done that until now.

First image is of ol'Michi lightheartedly prancing around in that tux of his and swinging from lamp post to lamp post as he belts out the song on an empty street at night... kinda like what Gene Kelly did in the 'Singin' in the rain', but you know, minus the rain. On the other hand, the other image I got was of him - still in the tuxedo - roaming the lamp-lit streets and staring at the pavement with hands in his pockets. An occasional glance up to the dark skies above to check out the stars with his head hung low most of the time as he reminisces a love one or something on that line. But either interpretation, I enjoy the song's atmosphere and it's goes great with the Christmas decor out in town at this time of the year, with the lights looking like star dust on the trees and buildings!

Anyway, written by Jusaburo Tojo and composed by Yoshiaki Abe (東条寿三郎 . 安部芳明), 'Hoshikuzu no Machi' was released in May 1962 and it was pretty well recieved. Being 1 of Michi's 18 'million sellers', it reached number one on the music ranking show 'Zenkoku Kayo Best 10' (全国歌謡ベストテン) and allowed him to receive the 'Singing Award' at the 4th Japan Record Awards. Plus, he got to sing the song once on the Kohaku. All that in the same year. Wow. 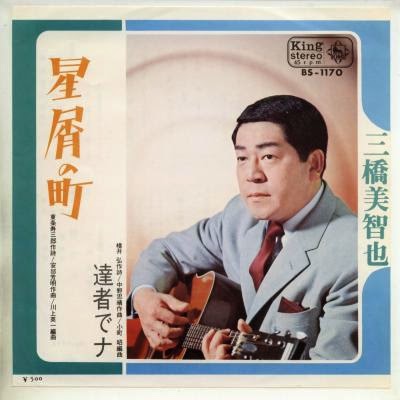