Akiko Kobayashi -- How Could I Ask For More?


I don't think I've ever encountered the musical equivalent of a J-Hallmark card before, but Akiko Kobayashi's（小林明子）"How Could I Ask For More?" pretty much fits the bill. Years ago, when I wrote up about her 4th studio album, "City of Angels", which was a package of wish fulfillment for all of her fans' musings about her vocal similarity to the golden voice of Karen Carpenter, I mentioned that the track "Let's Fall In Love Forever" was the most Carpenteresque-sounding song.

Well, that ballad does indeed bring feelings of the early 1970s and Carpenters harmonies but I have to say that listening to one other track and the topic of this article, "How Could I Ask For More?", I gotta remark that this one, too, also has plenty of Carpenters' love imbued into the vocals and melody. Written by John Bettis and composed/arranged by Richard Carpenter, Akiko's voice, the whispering backup vocals, the gently rolling music and even the saxophone solo had me thinking of Karen once again. And as I've mentioned once or twice before, The Carpenters are still seen as music deities in Japan.

"How Could I Ask For More?" was actually released as Kobayashi's 9th single in April 1988. I don't know how high it got on Oricon but if you want your fill of Akiko and Carpenters, get "City of Angels" for the full treatment. 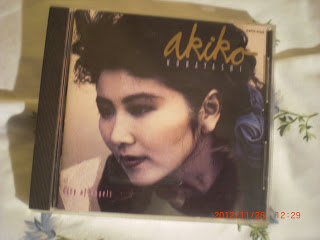