Well, wherever you are, I hope you are all celebrating your mothers. For me, the whole family took Mom out to a local Kelsey's for dinner. Afterwards once things settled down, I got to watch the latest movie in the "Detective Conan" series...something about Van Gogh and sunflowers. It was remarkable in that no one actually got murdered which was a relief and surprise to all of the characters.

Anyways, before I sign off for tonight, I just wanted to put up another track from one of the more remarkable albums by legendary 70s aidoru, Momoe Yamaguchi（山口百恵）. I wrote about the 1979 album "L.A. Blue" and the starting track "Get Free" many moons ago, and it stands out since it not only was produced in Los Angeles but it also has plenty of that American feeling to it. "Get Free" in particular struck me as sounding not at all what I had been hearing from her previously but like a tune that came straight out of my old radio tuned to AOR stuff from the West Coast.

"Tight Skirt", though, has more of a honky-tonk bluesy bent. It was indeed created by the husband and wife team of Ryudo Uzaki and Yoko Aki（宇崎竜童・阿木燿子）who had also made a number of Yamaguchi's later muscular hits such as "Imitation Gold". However, even "Tight Skirt" doesn't sound like a 70s aidoru kayo or at least, it sounds as if there were something overseas infused into it. I would expect this more from somewhere Stateside or perhaps in a really interesting nightclub in Shimo-Kitazawa in Tokyo. To be honest, I couldn't be sure whether to categorize the song as J-R&B or J-Rock so I settled for the compromise New Music. In any case, it's another intriguing track on an intriguing album.

I wrote the article on "L.A. Blue" well over 4 years ago and I did mention then that I would be interested in purchasing a copy of the album. Well, I still haven't done it and I was thinking about doing a bit of CD shopping in the next couple of weeks. Perhaps my procrastination will now end. 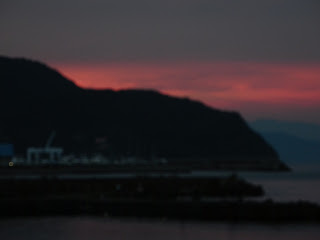