Sometimes, while discovering some obscure aidoru from the 80s, it’s not uncommon to come across some classic Eurobeat songs covered by them during the downfall of their already very fragile careers. That was the case with Naoko Isamu’s (勇直子) “Boom Boom Boom (Let’s Go Back To Your Room)”, which was a cover of the hit single released in 1987 by Greek-American model turned singer Paul Lekakis.

I just find funny that some overtly sexual Eurobeat songs were covered by Japanese female aidoru singers in the 80s. “Boom Boom” is surely a fun song, but it’s also full of sexual innuendos with Lekakis almost moaning during some lines. Also, it doesn’t help that the guy was a gay sex symbol at the time, which made the song even more raunchy. I don’t know... maybe they could have given “Boom Boom” to Shonentai (少年隊) or something like that. It would be a hot song in the Johnny’s group catalogue.

In the end, it was Naoko Isamu who recorded it, and her version even included a sax solo for whatever reasons. Arrangement-wise, I liked the cover a lot. However, I prefer Paul Lekakis’ vocals than Naoko’s softer voice for this type of song... well, that’s probably because I already associate the song with its dirty meaning, and Naoko Isamu was just too innocent looking in order to top Lekakis’ go-go boyish performance.

“Boom Boom (Let’s Go Back To My Room)” is one of those trashy Hi-NRG songs from the 80s, but I’m a fan of this stuff. My theory is that sometimes it’s better to know some dusted pop songs from a decade than its “repeated to death” classics.

Japanese lyrics were written by Yasushi Akimoto (秋元康), while music was composed by Stefano Montin and Tom Hooker (one of my favorite Italo Disco artists). As for the arrangement, Toshiki Kadomatsu (角松敏生) was the responsible for Naoko Isamu’s version (that explains the sax solo). At first, I thought it was a little bit strange to see Kadomatsu’s name on this "project", but he worked on a very similar arrangement in Miho Nakayama’s (中山美穂) “CATCH ME” around the same time. 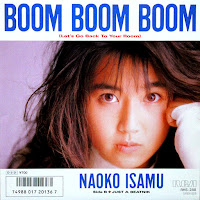