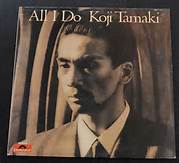 After listening to all that wonderful music by Anzen Chitai（安全地帯）back during my university days, when I found out that lead vocalist and songwriter Koji Tamaki（玉置浩二）was releasing his first solo album...well, I didn't hesitate to grab the audio tape at Wah Yueh one day. "All I Do" was released back in August 1987, and all I can say is that tastefully sepia photo of Tamaki was pretty intimidating. That old-style look with him glaring a thousand kilometres certainly made an impression.


However, it's been years since I heard my old tape and I figure I will have to risk the nearly 30-year-old relic on my relatively new recorder just to check if his songs still hold muster with me. There is the title track which also served as Tamaki's debut single as a solo singer (released a month earlier). Composed by Tamaki and written by Goro Matsui（松井五郎）, I remember "All I Do" for those church bells and the singer's plaintive vocals which sound as if he's on his hands and knees in front of a cathedral begging for his former flame not to go ahead with the wedding. Matsui's lyrics pretty much hammer the point home as Tamaki pleads for the woman to remember the good old days.


I'm not sure how Tamaki's debut single did on the Oricon charts since there is no article for "All I Do" the song on J-Wiki, but it's hard to imagine that it didn't score anything on the weekly charts at least considering that Anzen Chitai was so popular back then. But then again, there is no information on how the album did either. Geez, wouldn't that have been a shocker for the guy.

One other reason that I'm putting up this article is that I read this morning that Tamaki was hospitalized with a nasty case of diverticulitis and has been ordered to refrain from any work for the next month. As someone who has also suffered from some gastrointestinal issues recently, I can wholeheartedly sympathize with him on that matter. I'm hoping that he will get better soon.
Posted by J-Canuck at 7:36 PM