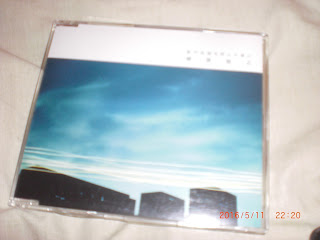 Noriyuki Makihara（槙原敬之）made a huge splash into music in the early 1990s and it was at that time that I was buying up his discs through the Eye-Ai CD order forms but on returning to Japan in late 1994, my interest started waning although I did buy one of his early BEST compilations. The singer-songwriter was still putting out plenty of songs, though, but he was no longer an audio priority with the incoming wave of Tetsuya Komuro（小室哲哉）and some other new musicians. And then, there came that news about his interviews with the police for drug possession at the end of the century, and I just thought to myself that it would most likely be a year or two before we heard from him again.

But return he did. And a couple of years after that in 2003, I saw this commercial hawking his latest single at the time. I was instantly entranced by the oh-so-calming ballad so I did what I hadn't done in several years and went out to get a Makihara CD single titled "Kimi no Namae wo Yonda Ato ni" (After I Called Out Your Name) which was Mackie's 29th single from May.


Just from looking at that cover of a cirrus-covered sky and the small print, I figured that this would be a pretty introspective song. There were those first few seconds of synth which confused me a bit but then I got that reassuring mellow melody.

Makihara has put out his fair share of uptempo songs and lovely ballads even within that early period of his, but I always saw him as being that goofily lovable songsmith of happy tunes. However "Kimi no Namae wo Yonda Ato ni" strikes me as being one of my favourite ballads by anyone. Just the way his voice sounds especially during the refrain brings one of those smell-the-roses moments for me. Plus, there is the official music video in which Mackie doesn't appear at all except through a cute little avatar sent over as a present.

Nope, the star here is actress Nanako Matsushima（松嶋菜々子）who was having her day in the sun on TV at the time. Listening to the lyrics by Makihara, I had first thought that the balladeer was mourning the loss of a significant other due to breakup or death but on watching the video, it seems to me that the lone Matsushima was getting along by herself after her boyfriend or husband was on temporary assignment in another city. Big sigh of relief from me.

One small anecdote on Matsushima. She got married to fellow actor Takashi Sorimachi（反町隆史）and a lot of folks were remarking that they were probably one of the tallest couples in the entertainment industry at 172 and 181 cm respectively. In my last years in Japan, one of my house calls, so to speak, was in the Tamagawa area in western Tokyo. I used to walk the 10 minutes over to my student's apartment right beside a massive hill on which there were some obviously very nice houses built on the side. He once informed me that Matsushima and Sorimachi lived in one of those residences. I once took a look at the slopes to get up to those homes and thought that even if I had wanted to slink upstairs, I would have ended up needing an ambulance back down. Talk about saving on the price of home security.
Posted by J-Canuck at 7:59 PM