Post-apocalyptic world with some fine entertainment.

Looks like Mom's now a fan of EXILE. Her rationale for liking this song and dance unit is that they actually look cool, ATSUSHI and TAKAHIRO sing decently, and their moves are on point.

While they are a group I don't exactly mind and it is quite hypnotizing to watch such synchronous dancing, I can't say that I know very much about them save for a couple of songs. So being exposed to more of their works and who's who in the whole hoard of them by Mom was an interesting feeling. The tables had been turned this time around! I'm usually the one introducing her to enka-yo stuff whether she likes it or not, and now she's educating me on the EXILE TRIBE... whether I like or not. But of course, that's only that much EXILE/J Soul Brothers I can take before I shut it out and return to my comfort zone. Also, I thought this to be rather amusing as if I were to be completely normal, it could have been the other way round.


Anyways, I'm still in the process of getting to know EXILE's other works, so I thought I'd write about something by them that I'm most familiar with, "Choo Choo Train". While I got to know this tune a few years back via the group behind the original version from 1991, ZOO, I often see it associated with EXILE who had remade it in 2003. It's one jaunty and catchy song so it's no wonder that both versions were hits in their time. I enjoy "Choo Choo Train" for its nice beat and the trumpets in the background makes it more funky. However, similar to what J-Canuck had said in his own article regarding this song, the English words in the lyrics have me wondering what they even mean. Comparing both versions, I have to say that EXILE's one sounds more soulful, especially when ATSUSHI comes in, but I have no favourites; both are good.


Hang on, actually, I stand corrected. I do have a favourite version. He's not as flexible as the members of ZOO or as smooth as the EXILE guys, but Kiyoshi Maekawa (前川清) made up for that in terms of effort in his attempt at this pop classic. He wasn't doing his usual pillar shtick in this bit of his 40th anniversary concert in 2008, alright! Mae-Kiyo's version can also be found in the album "Enka no Chikara Saikyo Z White" (エンカのチカラ 最強Z ホワイト) from 2011. Ah, he really never fails to surprise me. :) Dang, this feels like the Itsuki-"Aishitsuzukeru Bolero"-thing all over again. 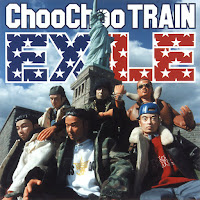