As is probably the case with the vast majority of people out there, I've got a few very specific likes when it comes to music. There are the velvety-smooth sounds of a Fender Rhodes, the sonic bang from a City Pop electric guitar and some mellow piano in an indie pop setting. And I've also appreciated strings in a jazzy or whimsically pop arrangement. That last one is well represented by the legendary jazz violinist Stephane Grappelli especially when it came to his partnership with jazz guitarist Django Reinhardt.


One of my favourite comedies of all time has been "Dirty Rotten Scoundrels" with Michael Caine and Steve Martin. In addition to the often-hilarious scenes that made the movie was that 10th player in the outfield represented by Miles Goodman's soundtrack which had plenty of those jazzy strings to oomph things up.


Last night, I was doing my usual maintenance of checking over the past articles to see that their videos still existed when I re-acquainted myself with nikala's article on Chika Ueda's（上田知華）"Purple Monsoon". She was kind enough to include a video that had a goodly amount of her work with her quintet Karyobin in the late 1970s and early 1980s, and after taking a good listen once more to the fine combination of pop strings and Ueda's voice, I once again gained some wonderful appreciation to this little unique corner that the singer-songwriter provided in the world of Japanese popular music at the time.

When I first read nikala's article, she pointed out the main song of "Purple Monsoon" which comes on that video at 11:43. To be honest, all of the songs are great but as I mentioned in my comment to her at the bottom, there was one song that I believed to have heard years ago on one of the more uncommon, and probably more New Music-oriented, episodes of "Sounds of Japan", that old CHIN-FM radio program I used to listen to for years. And sure enough, the very last song on the video was that very song.


"Aki Iro Kesho" (Autumn Makeup) was originally written, composed and sung by Chika Ueda as one of the singles for her and Karyobin in August 1981. When I had first heard it on that Saturday night broadcast, I thought it was a rather odd quiet tune during a time of synth-happy aidoru songs and the traditional enka. Thinking about it now, it reminded me as a throwback to the music of nearly a century ago when orchestras played what was called sweet music, the genre of non-jazz music played at events such as formal parties. I didn't know what to make of it then but I appreciate it much more now. It was quite the revelation back then since at the time that I had first heard of Ueda, it was because of that one pop song she sang for a Fuji-TV drama in 1991 titled "I Will".

"Kayo Kyoku Plus" has a number of articles involving Ueda including this article as of this writing but almost all of them involve her songwriting duties. Therefore, it's nice when I can include her as an actual singer since she does have a pleasing voice to my ears. By the way, while the above two videos show cover versions of "Aki Iro Kesho", the original version can be found in the video in nikala's article at around the 19:12 mark. That version was also a track on Ueda + Karyobin's 5th album from 1981, "Miss Heart".


Thiking about the title, it was no surprise that "Aki Iro Kesho" was used as the campaign song for Pola Cosmetics. Unfortunately it didn't get into the Top 10 commercial jingles for cosmetics as shown in the above video, but looking at it, I found out that all of the entries except for No. 4 and No. 2 are represented in the annals of this blog.

I actually had the opportunity to get a Chika Ueda + Karyobin album one time a low low price at Recomints in Nakano Broadway but didn't bother to shuck out the yen. Consider that an opportunity lost but I will try to get one of their releases someday if it isn't too late. 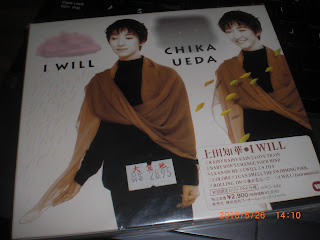