When it comes to the topic of B-sides or as they later became known on the older CD singles, coupling songs, I've found that there can be some gems hidden among those chosen songs that may have been simply thrown in by the producers simply because they needed to fill up the vinyl or polycarbonate. One of the first examples of these hidden gems came in the form of a Hiromi Iwasaki（岩崎宏美）ballad titled "Akai Ito"（赤い糸...Red String）which was the B-side to her biggest hit "Madonna Tachi no Lullaby"（聖母たちのララバイ）. Alas, there is no sign of it on the Net but it remains one of my favourite Hiromi songs nonetheless due to its arranged mix of Japanese pop balladry of those days and a hint of City Pop.

This B-side is also a very pleasant surprise. Tomoyo Harada（原田知世）sang "Zutto Soba ni" (Always By Your Side) as the B-side to her breakthrough 3rd single "Toki wo Kakeru Shojo"（時をかける少女）from April 1983. And like that hit, "Zutto Soba ni" was written and composed by Yumi Matsutoya（松任谷由実）. What I like about it is that Matsutoya mellowness that seemed to infuse a lot of Yuming's own ballads during the early 1980s and the songs that she provided for other singers such as Harada. The icing on the cake is the singer's own voice as she sings about always being a friend to that someone although she secretly wants (but may not achieve) an upgrade in their relationship. I've been currently watching the last few episodes of the anime "Chuunibyo demo Koi ga Shitai! Ren"（中二病でも恋がしたい!戀...Love, Chunibyo & Other Delusions -Heart Throb-）and I think this musical equivalent of bittersweet chocolate would have made for the ideal theme song.


Yuming also gave her own lovely version of her own song as a track on her 14th album "Reincarnation" from February 1983 which means that her cover of "Zutto Soba ni" predated that Harada B-side by a couple of months. As for the Harada version, it was also on her debut album "Birthday Album" from November in the same year and got on her BEST compilation "Image"（イマージュ）. 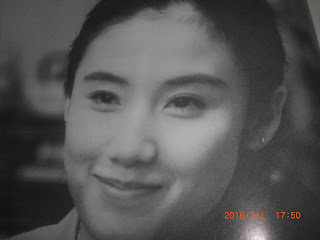