Keeping with today's theme of worthy B-sides that I started with Tomoyo Harada（原田知世）this morning, I found another one with another singer from the 1980s, the late Kozo Murashita（村下孝蔵）.

"Oka no Ue kara" (From The Top of the Hill) was the B-side to Murashita's biggest hit, "Hatsukoi"（初恋）released in February 1983. The singer-songwriter was playing around with synthesizers during that time including in his magnum opus, but with "Oka no Ue kara", it was more back to his folky roots as he crooned about the sweet sorrow of parting while on the top of the hill that he and his old flame had frequented in happier times.

Languid as a calm brook, the effect was further heightened with a country-like twang thanks to what sounded like an old steel pedal although there was a slow and majestic bass line that hinted at the finality of the relationship. It was quite the counterpart to the jumpy city beat of "Hatsukoi". 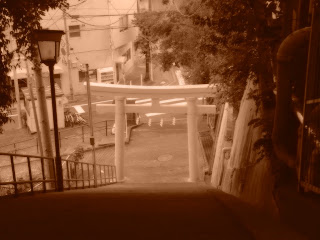