Not sure if any of you readers out there have seen Hayao Miyazaki's "Kiki's Delivery Service" and wished that it could have been made into an anime series. If that is the case, then you might luck out with this anime on NTV called "Flying Witch" (ふらいんぐうぃっち) that started its run last month.

Just like the Miyazaki classic, the show stars a teenage witch who strikes out on her own with her cat. However, instead of residing in a quaint old European-style town, the character of Makoto puts up stakes in real-life Aomori Prefecture with her cousin's family, the Kuramotos, as she creates a new set of good friends. In my last anison-based article about the show "Kumamiko" (くまみこ), the main character there wanted to get out of the boonies but with "Flying Witch", Makoto is more than happy to reside in the relative countryside. And I have to admit that on seeing the settings there and the Kuramotos' large house, there is something very attractive about life up north.

What also helps is the opening theme by singer-songwriter miwa with the assistance of 96 Neko, "Sharanran". It's as down home and comfortable as talking a walk in Makoto's new home of Hirosaki City. Composer NAOKI-T also assisted miwa on the creation of the song.

miwa is a singer armed with a guitar that I have seen before on other music shows and she has a smile as wide and winning as a certain other Miwa I know. And she is another performer that I've seen on the Kohaku Utagassen but had yet to write anything about until tonight so I will have to take a closer look at her discography. 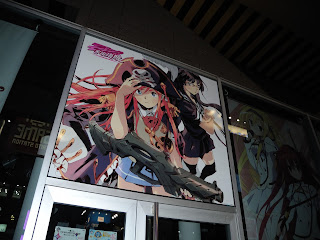