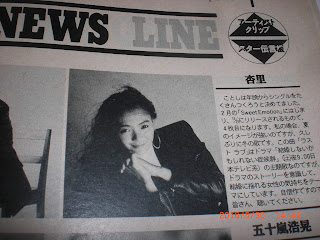 Well, Happy Monday to you all! I realize that going back to work or school is probably not the happiest thing of the week but in my own piece of the planet, it's looking pretty summery out there. I may actually need to put up the fan in my room. In addition, with the hot weather coming in, where this blog is concerned, it's also time to bring in some Anri（杏里）.


Thinking about Anri's long career, I have to say that my personal favourite period when it comes to her is when she and Toshiki Kadomatsu（角松敏生）were making some of that beautiful music in the early to mid-1980s. Still, there is also some of that fun-in-the-sun R&B that she, lyricist Yumi Yoshimoto（吉元由美）and arranger Yasuharu Ogura（小倉泰治）were making from the late 80s into the new decade.

Case in point: I was nearly through my first of 2 years on the JET Programme when I saw Anri promoting her latest album, "Mind Cruisin'" through some frenetic dancing on TV. Having savored my purchase of her previous album of "Circuit of Rainbow" the year before as an eventual memento of the start of my first post-university job in Japan, it didn't take too much of an arm twist to get "Mind Cruisin'", her 14th album from June 1990.

I had some indication that Anri could pull off some dance moves but the music video had me convinced that she could keep up with her dancers. Then again, I was truly impressed when I discovered the same year that Yumi Matsutoya（松任谷由実）was also more than able to bust a move on stage. In any case, the title track was notable in that I couldn't hear any of that horn section which often populated an Anri tune but that didn't bother me at all. The synths and the bass kept the fun going well enough. 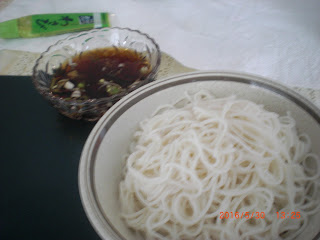 It's not even June yet and I'm already feeling that natsubate. So I had the usual Japanese summer lunch of soumen.
Posted by J-Canuck at 3:49 PM

Email ThisBlogThis!Share to TwitterShare to FacebookShare to Pinterest
Labels: 1990, Anri, J-R and B, Single, Yumi Yoshimoto