A couple of weeks back, the topic of this singer-actress, Yoshiko Yamaguchi (山口淑子) a.k.a. Lee Xianglan/Ri Koran (李香蘭) was brought up by Mom after I pointed out that a guest on "Uta Kon" sang "Soshu Yakyoku" or "Suzhou Yequ" (Suzhou Serenade). While she's normally not particularly enthusiastic when it comes to ryukoka, things were different when it came to this song as she so happens to know it and actually likes it - its Chinese version, that is.

Personally, I was able to recognize "Soshu Yakyoku" as many singers have done covers (which was how Mom got to know it too) of this old-but-gold tune, including ASKA, and was somewhat aware that it was originally a duet with Noboru Kirishima and Hamako Watanabe, but that was about it. That was where Yamaguchi came in. Via Mom I got to know some basics about the China-born Japanese woman with a turbulent past who had sang "Soshu Yakyoku" as well, and some research afterwards showed that she was technically the first one to sing it when she played as the lead in the 1940 film, "Shina no Yoru" (支那の夜) - she also happened to be a politician in the 70's, and vice president for the Asian Women's Fund. Apparently the characters for "Shina", which are pronounced as "Zhi-na", mean China. Initially I had no idea why that was the case until Mom shot me a death stare and said that this "Zhi" is read as the "Chi" in "China"... She almost wanted to knock me on the head. I think she would have if I had sat nearer to her.

Head-knocks aside, listening to "Soshu Yakyoku", I can see why it is such a popular song despite being in a Japanese occupation propaganda film. The mellow music with that tinkling that pops in from time to time makes me envision what a night scene in old Suzhou would have been: calm waters of the canals that flow through the area gently lapping at the banks, reflections of some small light sources dotted on the dark surface, a little boat or two gliding along, old-style buildings sitting by the water's edge silently. I can also imagine someone sitting by the window of one such old house staring at his/her view. Very nice and comfortable. While in my mind I only pictured there to be a lone figure with his/her thoughts, "Soshu Yakyoku" seems to depict a couple enjoying each other's company in said town. In that case, the duet feels like the companions are talking to each other. Putting the track together were Yaso Saijo (西條八十) on the lyrics and Ryoichi Hattori ((服部良一) on the music.

"Soshu Yakyoku" was officially made into a single in August 1940 when Kirishima and Watanabe recorded it, two months after "Shina no Yoru" came out in theaters. Yamaguchi did come to record her version more than a decade later in 1953, and it got used as the theme song to "Hoyou" (抱擁), a film that also starred the lady herself. Being a coloratura soprano, Yamaguchi's voice was really high when she sang the song, but somehow I found it quite pleasant, and it reminds me of some of those old Disney movies like "Snow White" when the titular character sings.

As I had mentioned above, there are also Chinese renditions of "Soshu Yakyoku", or should I say "Suzhou Yequ", and I managed to find one rather easily. This one's by a popular Taiwanese singer by the name of Fei Yu-ching (費玉清). I do like his version - fuller, smoother arrangement, plus that delicate voice of his. 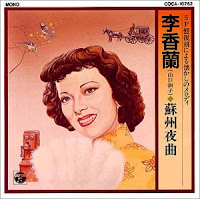