Momoko Hayashi -- You make me happy!

About a couple of weeks ago, I put in an article about Aya Matsuura's（松浦亜弥）"Yeah! Meccha Holiday"（Yeah! めっちゃホリディ）in which I also noted that the Hello Project aidoru had an impersonating admirer in the form of tarento Ai Haruna（はるな愛）. Well, I completely forgot that Haruna wasn't the only Japanese celebrity who enjoyed performing "Air Ayaya". There was also fellow impersonator Ken Maeda（前田健）. Although not as much as Haruna, I remember seeing Maeda appear on the various variety shows taking on other guises including that of a typical ko-gal.

Well, 2016 has been a very sad year so far in terms of the music world with so many musicians passing on rather suddenly. The anime world as well has also had some similar sadness to a smaller extent over the past several months. Seiyuu Miyu Matsuki（松来未祐）died late last year due to illness and then just over the past week, the aforementioned Ken Maeda left this mortal coil at the age of 44 because of what seems to be heart failure.

Maeda didn't make a huge contribution to anime since he only performed 2 roles in that genre. However he did apply his other talent of choreography to an anime franchise that was perhaps in need of some reformation at the time. The "Pretty Cure" series（プリキュアシリーズ）had already been around on TV Asahi for about half a decade but according to my anime buddy, following the adventures of the first three Precure teams, the powers-that-be decided that it needed a bit of a shakeup. So, there was a change in production staff and a slightly older team for the new show known as "Fresh Precure!"（フレッシュプリキュア!）which premiered in 2009.

Then, there were the ending credits. In the earlier shows, there was some dancing of a somewhat clunky variety involved with the characters but it looks like the producers decided to amp up the choreography with the contribution of MaeKen and with the addition of some 3D-esque visuals along with music that touched upon different genres, the new team launched a new tradition in the franchise in those ending credits that would continue until the present day. Maeda would also help out in the credits dances for another few seasons and he also played the character of Kaoru-chan, the eccentric and good-hearted mobile donut seller on "Fresh Precure!".


But I have to say that the first ending theme for "Fresh Precure!" has been the standard-bearer. "You make me happy!" indeed makes me happy. It was written by Sumiyo Mutsumi（六ツ見純代）and composed by singer-songwriter marhy with Momoko Hayashi（林桃子）on vocals, and I think the fans who actually saw the credits for the first time must have been surprised to hear some good old-fashioned R&B with snazzy horns enter the Precure universe. In a way, the song reminds me of some of Keizo Nakanishi's（中西圭三）early stuff back in the 90s.

"You make me happy!" was released as part of a single including the opening theme, "Let's! Fresh Precure!" in February 2009. It got as high as No. 25 on the singles charts.


To leave off, here is MaeKen with his other famous character. 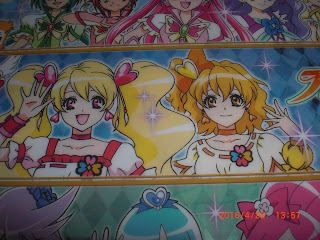