Steadily getting through the now-annual traffic jam of superhero TV shows and motion pictures. I caught "Captain America: Civil War" (pretty good), "Batman vs. Superman" (not very good) and the season finales for "Gotham" (fine), "Agents of SHIELD" (bittersweet but good) and "The Flash" (hmmm...the jury is still out on that one). And there is another movie around the corner with "X-Men: Apocalypse" coming out this Friday here in North America.

The movie and the marketing seem to be shivering in the huge shadow left by the latest movie in the "Captain America" franchise, and apparently the reviews haven't been all that great although they should still better those for "Batman vs. Superman". I still want to see "Apocalypse" nonetheless because I have been an "X-Men" fan for decades. In fact, among my scattered collection of comic books, "X-Men" has taken up the most space.


Just a few minutes ago, I came across another video in the long series of the hilarious "Honest Trailers" series, and strangely enough, the (mutant) powers-that-be over there decided to aim their ruby quartz visors at the 1990s X-Men cartoon. Broadcast a good chunk of a decade before the very first "X-Men" live-action film launched the franchise of mixed results, for mutant fans like myself, the cartoon was manna from heaven. It may look rather clunky and dated now but back then, I was quite happy catching it on Sunday mornings. Plus, I have to say that the theme song for the cartoon is still more memorable than the theme for the movies.

Now, lest you folks start thinking about why I am dragging in a purely different pop cultural fave into a blog about Japanese popular music, that Honest Trailer on the X-Men cartoon series also briefly featured the theme song used for the Japanese broadcast of the show. As Mr. Honest Trailer Man quipped, "Sugoi".

I think that urgent original theme by Ron Wasserman was still being used but the Japanese broadcast also used a hard rock anison titled "RISING" along the lines of "Ai wo Torimodose!!"（愛をとりもどせ!!）for "Hokuto no Ken" (Kenshiro vs. Wolverine?...yeah, I'd see that) whose melodic legacy has been passed onto JAM Project for "THE HERO!" from "One-Punch Man" (hmmm...how about Saitama vs. Wolverine?). There is even the word "SHOCK" in the lyrics (one personal pronoun and a definite article away from copyright litigation).


Looking at the Japanese opening credits, I think the animators were chomping at the bit to give their ode to the X-Men. Anyways, "RISING" was written, composed and sung by the rock band AMBIENCE as the theme song for the first half of the episodes shown. Junichi Kurata（倉田順一）who had been part of a Johnny's Entertainment aidoru group known as SHADOW, brought together a few other guys to form the band in 1993. Kurata was the first lead vocal for AMBIENCE until Hiroshi Kitagawa（北川浩）took over.

"RISING" was released as the band's 2nd single in May 1994 as one-half of the disc "DREAMIN'/RISING". It didn't rise too high though as it peaked at No. 95 on Oricon and sold 4000 copies which contrasted with its debut in November 1993 of "Saigo no Yakusoku: See You Again"（最後の約束...The Final Promise）which hit No. 10 and was even used as the theme song for a Fuji-TV drama.

In any case, I will be looking forward to reading those reviews for "Apocalypse" in the next couple of days. 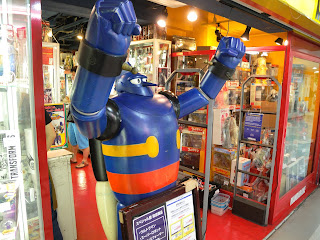